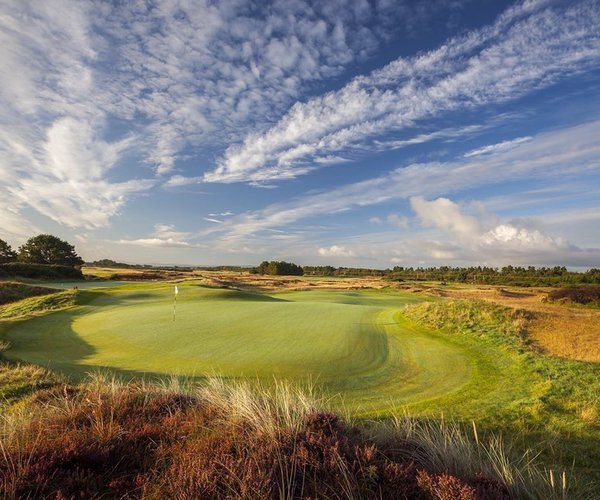 From the A78 one mile south of Irvine, exit at the Newhouse Interchange (Irvine A737). At roundabout (top of exit ramp) follow direction Town Centre / Harbourside. After 150 yards at next roundabout take first exit, direction Dundonald. After o.7 miles golf is on your right.

Dundonald Links: Golf was originally played on this site as far back as 1911, but at the outbreak of World War II the course went into a long period of dormancy. As a sister course to Loch Lomond Golf Club, Dundonald was eventually relaunched in the early-2000s, firmly resuming its place alongside the west of Scotland's treasure-trove of coastal links courses.

Although the site doesn't occupy the best of the area's natural duneland, Kyle Phillips' design contains all the attributes of a classic links layout. Occupying what was originally relatively flat terrain, the layout now benefits from gently undulating fairways as you thread your way through the dune-like mounds and gorse bushes.

Strategically located pot bunkering is much in evidence around the greens. Neatly trimmed water ditches also play their part in the course's defences, especially guarding approach shots into the long par-5 18th green. Among an excellent collection of short holes, the par-3 11th and par-3 15th both use deep pot bunkers to up the "intimidation factor" as you look from tee to green. In true links fashion, the large undulating greens are flanked by slick run-off areas, which carry the ball away from the putting surface into challenging bump-and-run territory.

Separated from the seashore by Western Gailes Golf Club, and flanked by Gailes Links to the north and Kilmarnock Barassie to the south, Dundonald offers only occasional glimpses of the sea. In keeping with its neighbours, it does however lay down a fair and challenging test of golf, never more so than when the wind is blowing.

Slated at one stage to re-open as Southern Gailes Golf Club in 2002, the new course in fact opened for play in 2005 as the Dundonald Links (see our Did You Know section below).

Dundonald (meaning Fort Donald) took its name from a nearby hill, on which ancient fortifications date back to the period 500-200 BC. Occupying roughly the site of today's Dundonald Links, the Dundonald Gailes Golf Club was home to a course here between 1911 and 1936. The neighbouring Western Gailes GC and Glasgow (Gailes) GC (now called Gailes Links) also had memberships mainly comprising wealthy Glaswegians wanting to play golf on the Ayrshire coast.

The Dundonald Gailes course was converted to military use during World War II. After many years lying dormant after the war, work finally got underway in 1999 to relaunch the course as Southern Gailes Golf Club. Just prior to its grand re-opening in 2001, the course was snapped-up by Lyle Anderson, the Arizona-based owner of Loch Lomond Golf Club, with the purpose of providing Loch Lomond's global membership with a traditional links challenge. The course underwent a further period of closure and redevelopment, while a completely new design by Kyle Phillips was created. As a sister course to Loch Lomond (which it still is) the Dundonald Links eventually re-opened in 2005.