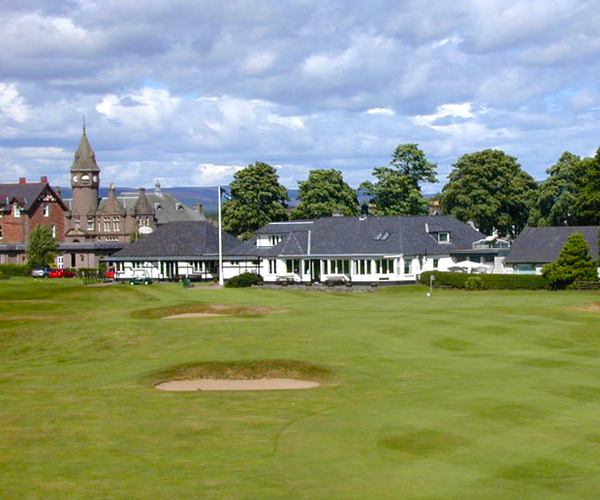 Turn off the A90 (Dundee - Aberdeen road) just north of Brechin, and follow the B966 direction Edzell. After 3.5 miles pass under the arch as you enter Edzell. The Golf Club is immediately on your left.

Edzell Golf Club: Close to the edge of Scotland's Grampian Mountains, Edzell provides a highly pleasurable golf outing in a partly wooded, partly open setting. The gentle opening short par-4 belies some of the longer, tigther tests to come, although generally there is enough room here to open the shoulders from the tee.

The wonderful closing stretch from the par-3 14th is the most scenic part of the course, inland Scottish golf at its very best. Much of the middle section of the layout is played on flattish terrain, with fir trees, young and old, separating the fairways.

Edzell may not be the stiffest test of golf in Scotland, but it will certainly remain etched in your memory as one of Scotland's lesser known gems.

Despite the game's long history in Scotland, there is no record of golf being played at Edzell until 1887, when Edzell Golf Club, playing over Edzell Muir was instituted. The Muir was an area of public land, not just used for golf. For the golfer, or would-be-golfer, the introduction around this time of the guttie ball (much cheaper than the existing, hand-made featherie ball), was no doubt one of the reasons for the rapid spread of the game. The good folk walking on the Muir were not too bothered by being struck by a ball stuffed with feathers, but to be hit with a solid lump of gutta percha was an altogether different matter. So Edzell, like many other golf clubs at the time, needed to find its own location. In 1896 a new course was opened for play on its present site. In 1925 the siting of a new clubhouse led to a reappraisal of the course as originally laid out by Bob Simpson, and by 1933 the course had assumed more or less the shape it is today.