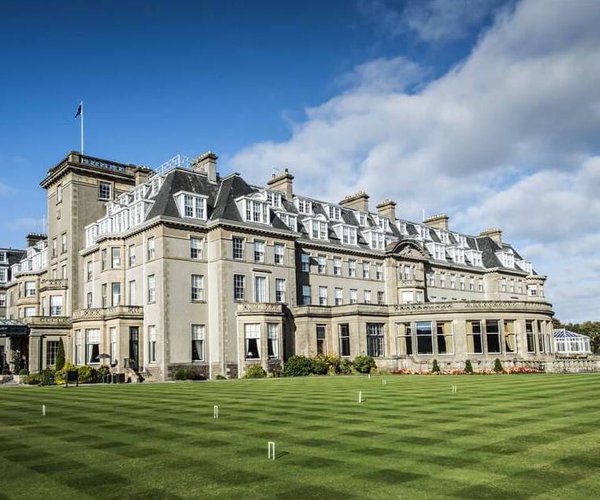 Gleneagles Hotel (PGA Centenary Course): If the King’s and Queen’s courses at Gleneagles are the stately "Royals," the PGA Centenary course is surely the Young Pretender. The big and bold PGA Centenary (originally known as the Monarch's course) is not too closely related to its regal neighbours, at least in terms of look and style.

Although the beautiful Perthshire hills and straths (valleys) are ever-present on the PGA Centenary, the layout doesn't fit quite as seamlessly into the surroundings as its companions. But it is the estate's main professional tournament course. And it has hosted a Ryder Cup. Amongst Scottish courses, only Muirfield can also make this claim.

Jack Nicklaus's PGA Centenary design was built on land previously occupied by the much shorter Prince's course. The Prince's, an 18-hole predominantly par-3 course with a few short par-4s, was bulldozed to make way for the grander new arrival.

Perhaps a case of "America meets Auchterarder," the PGA Centenary is a testing and challenging big dimension layout. Landscaped over expansive undulating terrain, the course brings into play plenty of water, extensive bunkering and vast greens. Each hole ensures your game is thoroughly examined, just ask any of the European Tour professionals who annually take on this 7,300 yard leviathan.

Must book in advance. Proof of handicap not required.

Opened in 1993, the PGA Centenary course took over from the King's course as Gleneagles' No.1 tournament layout for top level professional competition. In addition to being a regular European Tour venue, in 2014 the PGA Centenary course hosted the Ryder Cup, which was won by the Europeans, led by Irishman Paul McGinley. For more details see Top Golf Tournaments at Gleneagles GC.