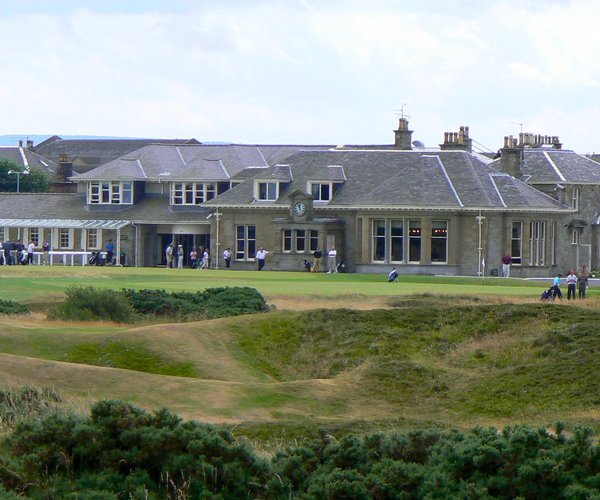 Prestwick Golf Club was home to the first 12 Open Championships (1860-72) and then hosted a further 12 between 1875 and 1925. Its place in golfing history is guaranteed. But historical significance is not the only attraction at Prestwick.

The golf course here is a favourite with links enthusiasts, even if some of the opening and closing holes are a tad "idiosyncratic." There are three short par-4s to be played in the first six holes, starting at the railway-hugging first. You'll also encounter a few blind shots to make, while Pow Burn dangerously flanks the 3rd and 4th holes.

The stretch of holes running from the par-4 6th through to the par-4 13th are as good as you'll find anywhere on a links golf course, and provide wonderful views onto the Firth of Clyde and across to the Isle of Arran. As with most seaside links courses there is plenty of pot bunkering to be avoided, as well as the vast railway-sleepered "Cardinal" bunker that straddles the fairway at the short par-5 3rd hole - a bunker far easier to get into than out of! The greens are generally fast and true with roller-coaster slopes that imitate the also curvaceous nature of the rolling fairways.

Taking a caddy on your first outing at Prestwick is recommended; local knowledge and finesse will serve you better than power, length and wayward hitting. Prestwick is an essential part of the Scottish golfing experience, where great pleasure can be gained in attempting to unravel the secrets of one of Scotland's most historic links.

Visitors welcome on weekdays and limited availability on Sundays.

The Open Championship, contested here on no fewer than 24 occasions, was last held at Prestwick in 1925 (see our Tournaments section >by Venue >Prestwick). The first twelve Opens (1860-1872) were played over the original 12-hole Tom Morris designed course, much of which remains intact to this day. Although no longer on The Open Championship rota, Prestwick is still used for major tournaments, including the British and Scottish Amateur championships. One of Prestwick's best stories involves the short par-4 opening hole, which is separated from a railway line by a stone wall. It is told that a lady once sliced her tee shot, hit a railway engine, the ball bouncing back over the wall onto the fairway. The engine driver, leaning out of his cab, said to the woman, "If its of any help, I'll be here at the same time tomorrow !"