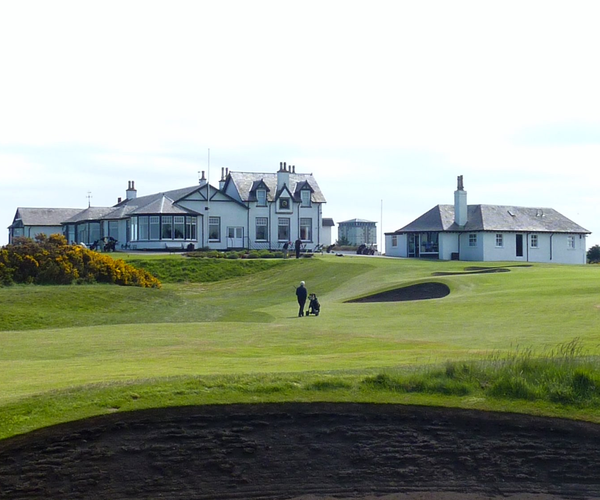 From the bridge over the River Don in the north of Aberdeen, follow the A90 north for 150 yards and turn right into Links Rd at the first set of traffic lights. After 100 yards turn left (still Links Rd). Clubhouse is 200 yards straight ahead.

Royal Aberdeen Golf Club (Balgownie Links): For several generations, the historic Balgownie Links at Royal Aberdeen has provided a demanding test for top-level professionals and amateurs alike. Here you'll find a classic links layout that goes out through the dunes and comes back along a plateau. Within the course's natural eco-system, rich turf and tight rolling fairways are a delight to behold, but at times intimidating to play.

The front-nine hugs the North Sea shoreline, and is played through an impressive area of sand dunes ... as challenging and satisfying a stretch of links golf holes as you'll ever play. Wonderful North Sea views from elevated tee-boxes, tightish fairways and uncompromising rough are here in abundance. Balgownie's legendary reputation is further enhanced by its superb greens, often nestling down and ringed by deep pot bunkers.

The back-nine is different in appearance and nature from the seaward holes, with less undulating terrain characterising the holes. On the inward stretch blind tee shots, hidden troughs and mercurial greens come to the fore. The concluding three holes form an excellent 4-3-4 finish, with the par-3 17th played to a long three-tiered green, and the good-length 18th a great example of disguised difficulty.

Visitors welcome at various times on weekdays, and after 3:30 pm on weekends.

Must book in advance. Maximum handicap: 24 (on Balgownie Links). Proof of handicap required.

Players generally walk this course. Limited availability of caddies (must be booked in advance).

As the world's sixth oldest golf club, it is no surprise to find that Royal Aberdeen is brimming with history and golfing firsts. The 5-minute rule for searching for a lost ball is attributed to Royal Aberdeen, and there are those who claim it as the first place that golf was ever played!