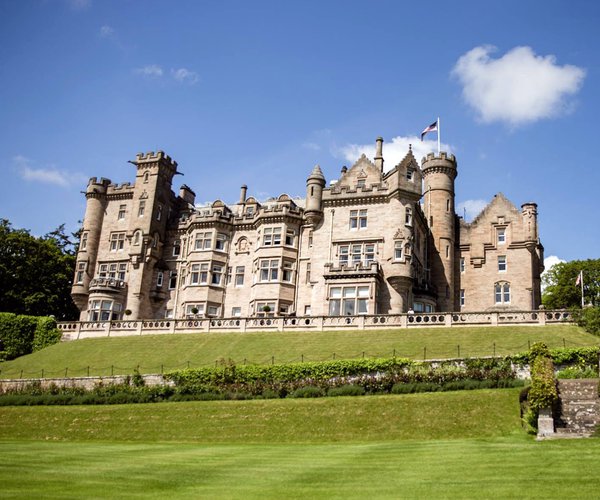 The Carnegie Club at Skibo Castle

From Inverness take the A9 direction Wick. After Tain and Glen Morangie cross over the Dornoch Firth bridge. After o.5 mi turn left, direction Meikle Ferry. After 1 mi turn right at green sheds, and follow road to Skibo Castle.

The Carnegie Links at Skibo Castle

The Carnegie Links at Skibo Castle: this revered name amongst Scottish golf courses, has until now been almost impossible to play ... unless you knew a member. Once the exclusive preserve of its wealthy international clientele, the Carnegie Club now offers limited access to play on its Links, to non-members of the Club. Two four-ball public tee-times are now available on weekdays during the summer months.

Under the guidance of its current owners, Skibo Castle (and the Carnegie Club) reflects both the style and the ideals of its original owner - Andrew Carnegie. If you make it onto the tee-sheet, you'll find an excellently maintained and presented course, with its links-golf credentials underscored by rolling dune-lined fairways, deep pot bunkers and plenty of gorse and heather.

Several holes on the Carnegie Links follow the shoreline of Dornoch Firth, affording magnificent views along the Firth and onto the surrounding Ross-shire hills and moorland. On the northside of the course the holes run alongside Loch Evelix, and the river of the same name. Undoubtedly one of the finest courses in the north of Scotland ... and less than five miles up the road is majestic Royal Dornoch.

The Carnegie Links (a facility of the Carnegie Club at Skibo Castle), now offers a limited number of public tee times, with two four-balls available Monday to Friday from mid-May to early-October.

Visitor fee, 18-holes (mid-May thru' early Oct only): £350pp (for a four-ball group), includes use of a locker, practice facilities, half-way house, three-course lunch at the Skibo Clubhouse (excl alcohol) and a memento gift bag.

Skibo Castle is the home of the Carnegie Club, one of the world’s most exclusive private clubs, named after the celebrated philanthropist and steel magnate, Andrew Carnegie. At the turn of the 20th century, Carnegie was the richest man in the world. He chose Skibo Castle as his country retreat, in the land of his birth.

The 8,500 acre estate is as stunning today as it was a century ago and the castle, imposing yet comfortable, enables guests to feel at home straight away. The name "Skibo" is Norse in origin, dating back to the 9th century, when the Vikings arrived from Norway and settled here.