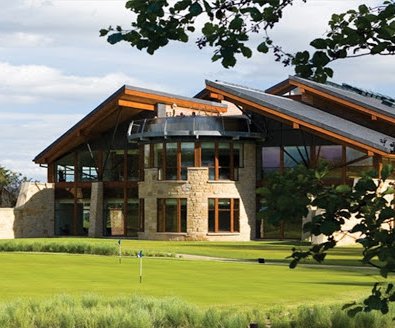 The Carrick on Loch Lomond

From Glasgow take the M8 (heading west direction Greenock) and then M898 and cross over the River Clyde at the Erskine Bridge. After approx 10 mi at the A82/A811 intersection (and Stirling turn-off) continue on the A82, direction Crianlarich/Tarbert. After approx 3 mi The Carrick is on your right.

The Carrick on Loch Lomond

The Carrick on Loch Lomond: Doug Carrick's first major design project in the UK has produced a stunning championship golf course. His skilful use of the undulating lakeside terrain allows the course to blend effortlessly into this ancient Scottish landscape. Pudding bowl hills, the majesty of Loch Lomond, and Ben Lomond in the distance ensure many spectacular views accompany your round. Along the way, Carrick's use of stylish deep revetted bunkers also reinforces the layout's unmistakably Scottish feel.

The flatter "lowlands" front-nine weaves its way through open meadows, rolling countryside and occasionally runs alongside inland lagoons. The par-4 3rd and 4th holes are a menacing duo of potential card-wreckers. Both are wrapped tightly alongside two separate lagoons. The long par-5 8th is a wonderfully handsome hole from its elevated teeing ground through to its heavily bunker-defended green; Glen Fruin gives the hole a beautifully scenic backdrop.

Greater elevation change and magnificent views onto Loch Lomond characterise the early part of the more open back-nine, while the closing stretch gets you right alongside Loch Lomond itself. The plunging par-3 14th is set to become one of the Carrick's most famous and photographed holes. It also marks the point on the back-nine where you eventually turn away from the A82 Glasgow-Crianlarich road, which is never too far away from the course's western boundary.

The excellent and modern clubhouse matches the quality of the course. It is also home to Cameron House's revitalising Spa; where better to soothe those tired muscles and possibly bruised golfing egos!

The Carrick golf course is part of a spectacular Stay&Play development that also includes Cameron House, an 18th century baronial lodge on the banks of Loch Lomond. The Carrick has host many prestigious amateur and professional tournaments, starting with the Ladies Scottish Open. For more details see Top Golf Tournaments at The Carrick.