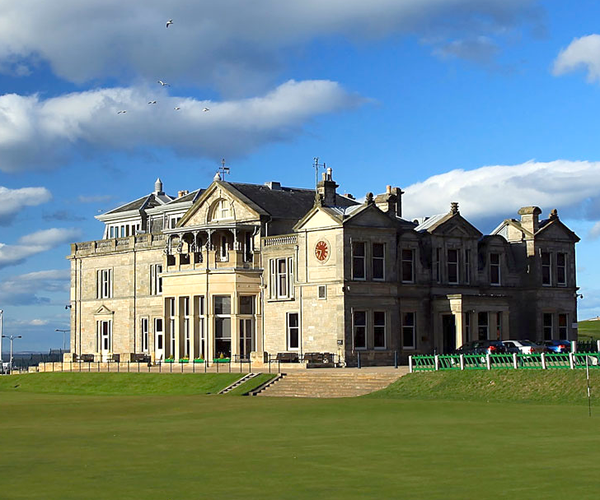 The Royal and Ancient Golf Club of St Andrews

The above distances are for the Old Course St Andrews, the "home course" of the Royal and Ancient Golf Club.

The Royal and Ancient Golf Club of St Andrews

Somewhat confusingly, the Royal and Ancient Golf Club of St Andrews is now a separate and distinct organisation from the R&A. The former is simply a private members golf club, albeit one of the most prestigious in the world .... ask any one of its 2,400 members, who enjoy exclusive use of its iconic clubhouse. In 2004, as the Club celebrated its 250th anniversary, it devolved responsibility for a number of its roles to a newly formed group of companies collectively known as The R&A. These responsibilities included the administration of the Rules of Golf, the running of The Open Championship and other key events, and the development of the game in existing and emerging golfing nations.

The relationship between The Royal and Ancient GC and the Old Course St Andrews is also frequently misunderstood. The Club does not own the Old course or, indeed, any of the courses in St Andrews. It is one of only four 'Royal' golf clubs in the UK whose members use a public course shared by other golf clubs; the other three are Royal Montrose, Royal Perth and Royal Epping Forest.

It was not until 1853, that the Royal and Ancient Golf Club raised sufficient funds to begin construction of a purpose built clubhouse. The foundation stone was laid by former captain John Whyte-Melville, directly behind the first tee of the Old Course. In June the following year the imposing sandstone building was ready for occupation. The style was simple and uncluttered with tall windows under a low-pitched roof. Members of both the Royal and Ancient Golf Club and Union Club shared the premises, prior to the two bodies officially amalgamating under the Royal and Ancient title in 1877. Over the next 70 years a succession of six architects added to the building, taking it upwards and outwards to finally create the structure that is now recognised throughout the golfing world. Although few signs of the original building are visible, it still exists within the framework of today’s clubhouse, cocooned within the layers of subsequent development.

Guests can only enter the Royal and Ancient clubhouse at the invitation of a member. Royal and Ancient's members play on the same public courses as played on by all golfing visitors to St Andrews, i.e. St Andrews Old course, New, Jubilee, Castle, Eden, etc.

The Royal and Ancient Golf Club does not charge green fees; it is a private members club and not a golf course.

The Society of St Andrews Golfers was officially formed in 1766. The club had, in effect, existed since 1754, during which year the "noblemen and gentlemen of Fife" started playing an annual competition for a Silver Club. The winner became the "Captain of the Golf" for the year.

In 1836, King William IV consented to become the club's Patron, conferring on the club the style and title of Royal. At this time, he also agreed with the club changing its name to the Royal and Ancient Golf Club of St Andrews. William IV had previously granted the use of the Royal prefix to the Perth Golfing Society in 1833 ... the world's first "Royal" golf club. By royal prerogative, 10 Scottish golf clubs can now use the "Royal" title, namely: Aberdeen, Royal & Ancient (St Andrews), Burgess, Dornoch, Duff House, Montrose, Musselburgh, Perth, Tarlair and Troon.