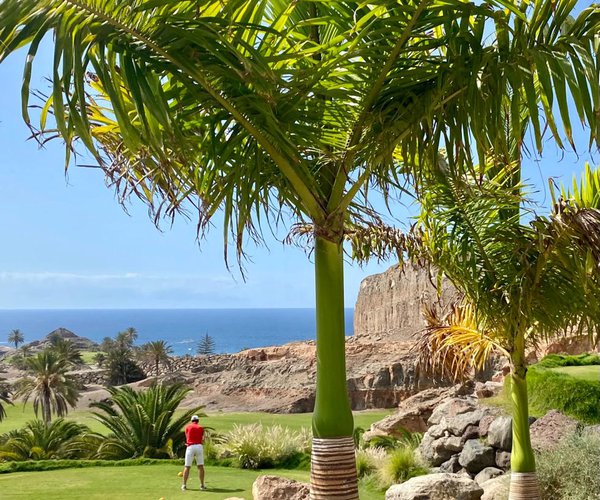 Anfi Tauro Golf: One of the newest kids on the Gran Canaria golfing block is certainly creating a stir. If pleasant parkland layouts characterise much of the island's golf, then this challenging, dramatic, Arizona look-alike has shifted the golfing landscape in a new and exciting direction.

Designed by Robert Von Hagge, with a few holes literally hewn from the volcanic rocks, it would be a serious understatement to say that every hole is different. Here at Anfi Tauro you can count on the demands of every hole thoroughly testing your game, no matter what your handicap. Water hazards, steep elevation changes, stylish bunker arrangements and large sandy waste areas all play their part.

The front-nine contains its fair share of excellent holes, not least the signature long par-3 6th. Played towards the ocean, a pyramid rock formation provides a much photographed backdrop to the green. On the back-nine you play up and into a scenic canyon, where the volcanic rock formations can be inspected at close quarters.

Holes like the par-3 13th, played to a postage stamp of a green (and over 200 metres from the tips) is one of Anfi Tauro's scariest holes. The short and very scenic par-4's at 16 and 17 are an easier-going duo, provided your tee-shots are straight and true. A huge horseshoe double-green closes out each of the nines, and is only reached with accurate approach shots over a lake.

With limited housing around the course and pleasant sea views from many vantage points, this ruggedly handsome and still maturing newcomer will continue to grow in stature and reputation for many years to come.

Golf course architect Robert von Hagge, designer of the Anfi Tauro layout, has a much deserved reputation as one of the elite of modern course designers. The formidable list of courses he has designed include many highly rated European courses, among them (and featured on Where2Golf.com) : Les Bordes, Emporda, Courson, Kempferhof, Seignosse, Royal Mougins and Bogogno. Robert von Hagge was literally born and raised on a golf course. For six years in the 1920's, his father, Ben F. von Hagge, was associated with Donald Ross, the famous Scottish golf course architect. Ben became a country club manager and developer of club facilities, in and around the Chicago area. After graduating from high school, Robert von Hagge entered Purdue University Agriculture School, and majored in landscape architecture. In 1955, Dick Wilson, one of America's foremost golf course architects, employed him as an apprentice golf course designer. In 1962 von Hagge resigned his affiliation with the Dick Wilson Company in order to start his own firm, which has since been involved in over 250 designs in 17 countries.