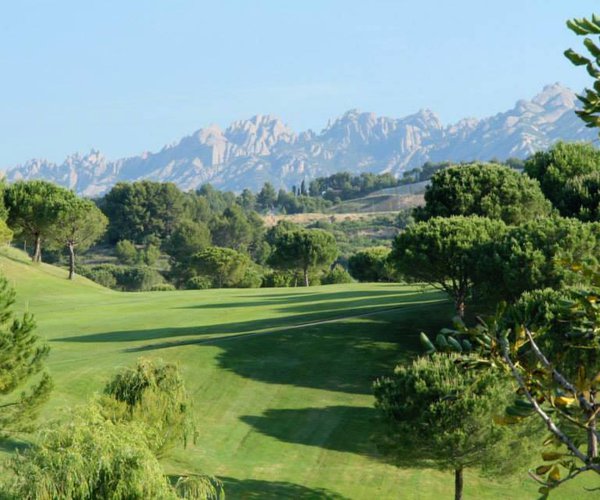 From the AP-7 motorway (Barcelona - Tarragona) take exit 25 (Manresa / Martorell / Capellades) and follow the B224 direction Capellades. After 6 km turn right at sign for Golf Masia Bach (ignore the first sign "Masia Bach" which is for the Chateau) and bear right. After o.7 km golf is in front of you.

Club de Golf de Barcelona: Formerly known as Masia Bach, now Club de Golf de Barcelona (Golf Club of Barcelona), this tight and hilly course can at times feel a bit contrived, although don't blame designer Jose Maria Olazabal for that. Creating a golf course in a seriously steep-sided and rugged ravine, which runs through the centre of this layout, must have consumed all Olazabal's design knowledge and playing experience. With OB, steep slopes and dense vegetation lining many fairways, your straight-hitting A-game will come in handy around this often perilously tight layout. If the terrain is getting the better of you, just stand back for a moment and admire the often spectacular views, or inspect the real estate that circles around the course's higher elevations. Although not one of the most "user-friendly" golf courses you'll play, this undulating and technically demanding layout still provides an exciting and scenic test for your game. The closing stretch from the par-4 15th shows you what might have been possible had the terrain been a little less testing for the designer.

Golf carts available for hire and must remain on cart paths at all times.

Lying in the Penedes wine-making region, the chateau Masia Bach (visible from the course) is home to the well-known "Bach" label wines.