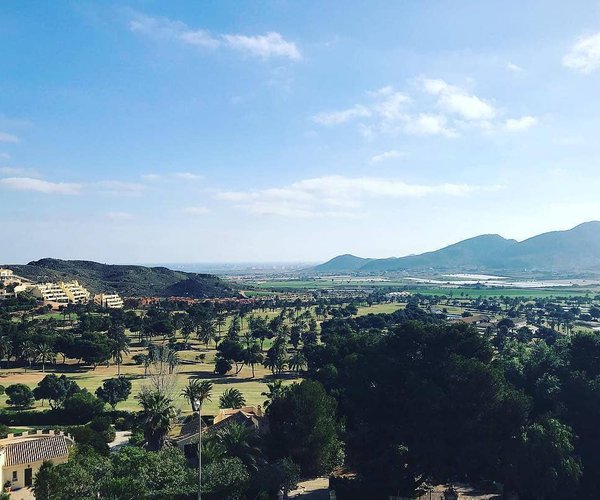 Real (Royal) Golf La Manga Club (West/Oeste course): Amongst La Manga's excellent trio of championship courses, many would argue the West course provides the toughest test. It is also the least "resort-style" in character. Much less evident here, are the flattish, good-width, palm-fringed fairways enjoyed by its North and South siblings.

Youngest of the three courses by some years, the West provides an exacting test of shot-making, requiring accuracy from the tee and thereafter. The terrain is distinctly more undulating than on the North and South, the barrancas (storm water gullies) more numerous, and the propensity to lose balls somewhat higher.

The rugged tree and bush-lined environment feels more natural, with the exception of one or two man-made water hazards, that look distinctly ..... man-made. If you stray too far beyond the fairways, there's every chance you'll discover the pine woodland that surrounds much of the layout.

A tightish front-nine, which demands accurate driving to avoid the barrancas, gives way to a more open back-nine that pushes up into the hills. Here you are rewarded with many outstanding views, not least at the dramatic par-4 18th hole, played from a wonderfully elevated tee.

The West is a favourite with many golfers, offering a playing experience that is both challenging and dramatic. Not only does the setting contrast with other parts of the La Manga resort, but the tighter fairways, pronounced elevation changes, occasional blind shots and snaking barrancas also give a markedly different feel to the more forgiving North and South layouts.

Must book in advance. Handicap certificate is not required.

Of the La Manga courses, the South course has been most frequently used for top level championships, including five Spanish Opens, hosted at the Resort during the 1970s.