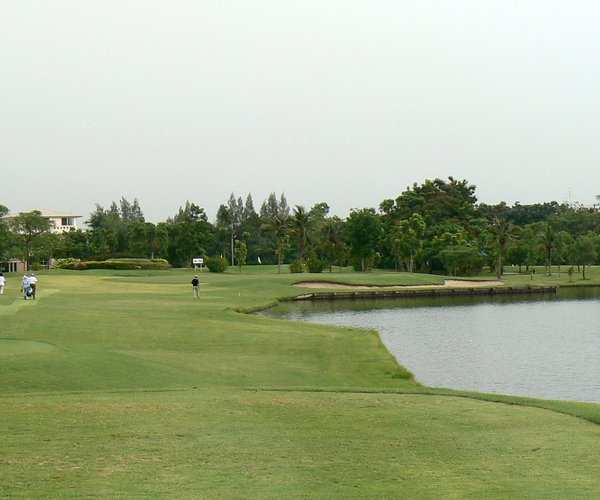 From the Sukhumvit area of downtown Bangkok, take the elevated Bangna-Chonburi Expressway (route 34), direction Chonburi. Take exit 4-02 and after 5 km make a u-turn (using u-turn bridge). Stay in the left lane and turn left into golf entrance at km marker 15.

Green Valley Country Club: Laid out by Robert Trent Jones II on relatively flat terrain (rather than in a green valley !) this is a popular Bangkok golf course, especially it seems with Japanese visitors. The nicely contoured and good-width fairways are generally lined with small trees and ripples of earthmounding; plenty of water flanks at least two-thirds of the holes (although this is not unusual for a Bangkok course). Many would describe this partly-open, partly tree/lake-lined course as pleasant and solidly laid out, rather than overly dramatic or technical, but it certainly has its fair share of challenges, as well as plenty of charm. The greens are generally large and undulating, sometimes protected by distinctive railway-sleepered bunkers. Dotted around the course are nicely carved traditional wooden shelters, very useful if the heavens should open, or you just want to get out of the midday sun. Palms and other tree varieties lightly line most holes, especially around the perimeter. The back-nine feels the stronger of the two, perhaps more open in places, but with water in play on almost every hole, not least at the short par-3 17th, which juts out into one of Green Valley's several small lakes.
List of courses: Around Bangkok