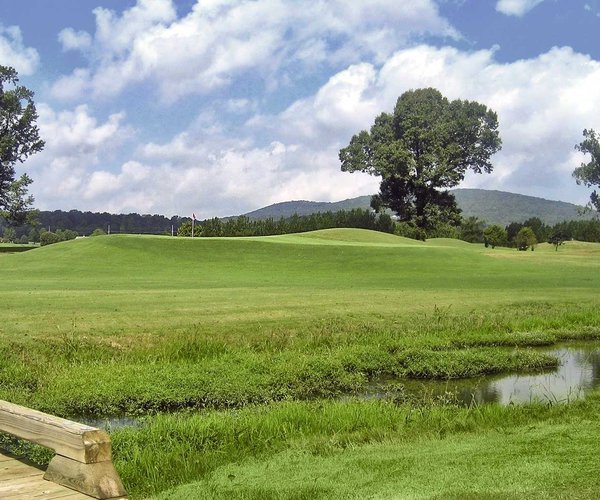 RTJ Golf Trail - Hampton Cove (River course): Here alongside the Flint River, you'll discover another of the many gems of the Robert Trent Jones Golf Trail. The River course at Hampton Cove is from start to finish a wonderfully natural and challenging test of golf. The layout bears the design hallmarks of a master craftsman - especially when you take into account some of the limitations of building a golf course in a river flood plain. Most noticeably, there are no sand bunkers; they would be swept away on the occasions when the river floods. The greens, several on the small side, are all elevated (although not as high as the electrical control boxes, which are raised 15 feet into the air on wooden platforms). Around the greens are grass bunkers and steep run-offs, while on them serious slopes and borrows will mesmerise even the best of putters. Matching the sloping greens, the fairways also have their fair share of pleasantly rolling contours.

The flood plain also accounts for the lack of any housing around the course, further enhancing its unspoilt naturalness. This out-and-back layout takes you to the River's edge at the par-5 10th, before you start to wend your way back to the clubhouse, hopefully avoiding the several water hazards along the way. This wonderful course allows you to enjoy golf at its natural best, with maybe a chance to glimpse a deer or two while bagging the odd birdie ?

Hampton Cove's River Course is laid out on former soybean fields in the flood plain of the River Flint. The river, which can be seen alongside the par-5 10th hole, drains into the Tennessee River about 10 miles south of Hampton Cove. >> ABOUT THE TRAIL : The Robert Trent Jones Golf Trail is a unique collection of eleven excellent golf venues spread through the State of Alabama. Dr. David Bronner, the then CEO of the organisation that ran the Alabama state-employees pension funds, originally conceived the idea of the Trail. He was convinced that creating a top-quality golf trail would attract golfers from near and far, raise Alabama's profile and at the same time earn a good return for the pension fund monies invested in the project - the world's largest golf course building project ever undertaken. The original courses on the Trail (located at Hampton Cove, Silver Lakes, Oxmoor Valley, Capitol Hill, Grand National, Cambrian Ridge, Magnolia Grove, and Highland Oaks) were all designed by Robert Trent Jones and opened for play in 1992. Lakewood GC at Point Clear was acquired along with the Grand Hotel; its two golf courses were recently renovated and included in the Trail. Although not designed by Trent Jones, The Shoals and Ross Bridge were added to the Trail in more recent years.