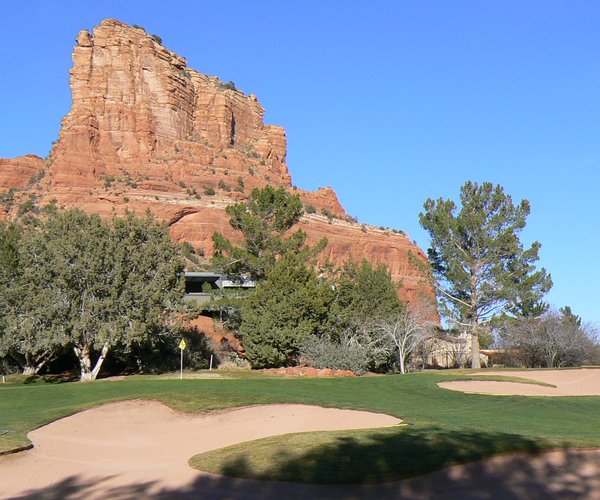 From I-17 take exit 298 onto Route 179 and head north, direction Sedona. After 7.5 miles, in Oak Creek, turn left at roundabout into Verde Valley School Road. After o.6 miles turn right into Bell Rock Blvd. After 200 yards golf clubhouse is on your left.

Oakcreek Country Club, running alongside the base of Sedona's famous red rock formations, is not a golf course that takes kindly to wayward power-hitting. This skillfully designed Trent Jones layout will test every facet of your game, not least your accuracy from the tee. 300-yard misdirected drives aimed at the often relatively tight and tree-lined fairways are unlikely to produce a flattering score. The course is laid out in two nine-hole loops, with pairs of holes weaving their way between the houses, which are generally tucked away behind bushes and mature pines, and never too conspicuous. Water is sparingly used, but becomes a dangerous threat on the four or five holes where it is in play. While Oakcreek is not overly undulating (unlike the nearby course at Sedona Golf Resort), it does provide many picturesque close-up views onto the area's impressive red rock formations. With an overall parkland rather than desert feel, this is a layout that continually probes and tests your golfing skills; accuracy from the tee and finesse around the well-bunkered greens giving the greatest rewards.
List of courses: Arizona

Located in Arizona's high desert under the towering southwestern rim of the vast Colorado Plateau, the area around Sedona is one of Arizona's premier tourism, recreation, resort, retirement and art centres. Characterized by massive red-rock formations, as well as the contrasting and spectacular Oak Creek Canyon, the area surrounding Sedona is considered at least as beautiful as many national parks. The cool high desert nights in summer, also attracts many local visitors.