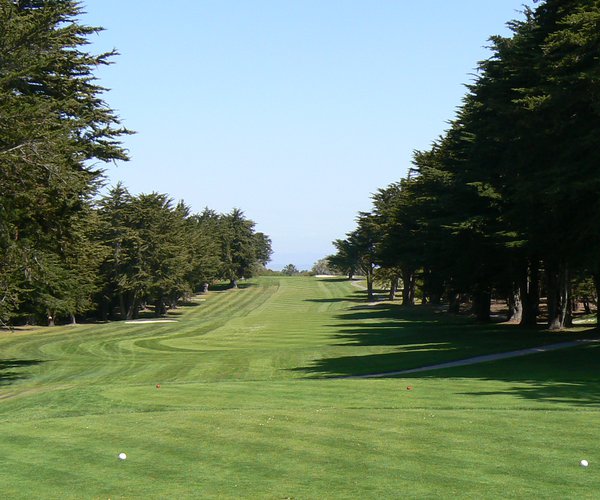 Bayonet & Black Horse (Bayonet course): Laid out in the bounds of a former military base (see Did You Know below), both the Bayonet and Black Horse courses were originally designed by US Army Generals. Both courses were dramatically upgraded during 2008/09, which added stunning new bunkering to the layouts (and considerable re-routing in the case of Black Horse).

The Bayonet course retains its elegant tree-lined character, with many testing holes laid out on the pleasantly undulating, but not overly tiring terrain. Tall oaks, cypress and Monterey pines still line the not overly wide fairways, along with the stylish revamped bunkering.

The transformation in the course's aesthetics and degree of challenge brought about by Gene Bates redesign were indeed dramatic. This utilitarian, former military layout gained a considerable injection of style and dash during its revamp - from industrious infantryman to handsome hussar!

Although the overall length of "the Bayonet" barely increased, the redesign brought about an immeasurable improvement on what went before. Now brimming with strategic and visual impact, the layout also benefitted from expanded views of Monterey Bay, not least at the very good par-5 18th.

Like its companion (the Black Horse course), Bayonet is steeped in golf and military history. The course is located on part of what was once the Fort Ord US Army base, and is named after the 7th Infantry Division (known as the Light or "Bayonet" Division).

The Bayonet Division were the first (and last) major unit to occupy Fort Ord, which served as a military base from 1917 until its closure in 1994. Some of the beachside terrain formerly occupied by Fort Ord is now a State Park. The Fort was named in honour of Major General Edward Ord, a Union Army leader during the American Civil War.

Bayonet Golf Course was originally designed in 1954 by General Robert B. McClure, the commanding officer of the base at that time.