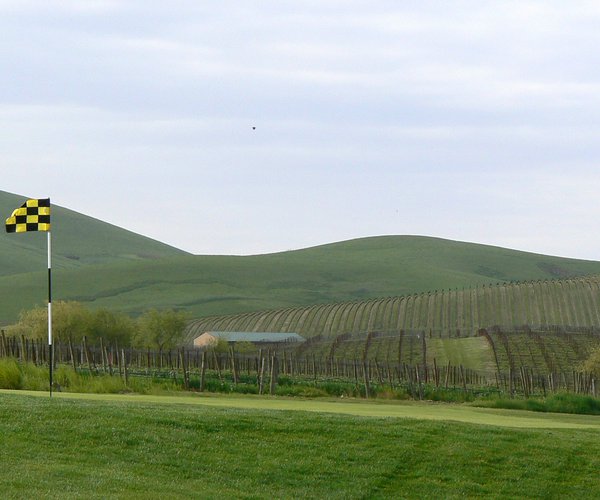 Chardonnay Golf Club and its neighbour, Eagle Vines, share much in common. They sit side by side on similar, relatively open and nicely undulating terrain, surrounded by vineyards, and not a stick of housing around. Both straddle Fagan Creek and both were originally laid out by Johnny Miller. In fact, ten of the holes on Eagle Vines, were amongst 36 that originally made-up Chardonnay. Now Chardonnay has been trimmed to an 18-hole layout, having been a 27-hole course for much of the 2000s.

Chardonnay's two out-and-back loops make excellent use of the rolling terrain, while probing and testing your game in equal measure. Each nine has elevated sections allowing you to enjoy views onto the soft, open hills of the southern end of Napa Valley. But don't think this layout is only about admiring the views and inspecting how the chardonnay, syrah and merlot grape varieties are coming along.

The bush and tree-lined Fagan Creek provides a serious threat at several holes, with the requirement for occasional approach shots over it, and a few drives will need to stay well away from it. Small lakes and ponds also mischievously protect some of the approaches. The island green par-3 14th, surrounded not by water but by vineyards - is one of six challenging par-3s that will test your game.

At times quite forgiving, at others less so, Chardonnay, like its neighbour, is definitely one of the golfing highlights of the Bay Area. After the round what better than to sample a glass or two of the local produce!

Chardonnay Golf Club is located at the southern end of the Napa Valley wine growing region, with the majority of the valley's 340 wineries stretching northward for a further 30 miles along the valley. Chardonnay as a grape variety, is the "Big Daddy" of white wine grapes.

The Burgundy region of France is Chardonnay's spiritual home, but it is now one of the most widely planted grape varieties in the world. Chardonnay grapes produce many different styles of wine, from elegant "flinty" Chablis, to buttery Meursaults, New World wines with tropical fruit flavours and as an important component of many sparkling wines, including Champagne.