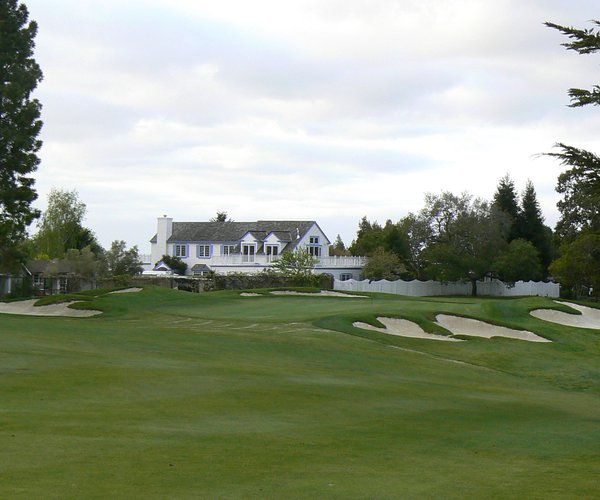 From Hwy 17, just north of Santa Cruz, take exit 1 (Pasatiempo Drive). Cross-over to the west side of Hwy 17, and follow Pasatiempo Drive / Clubhouse Road north for o.6 miles to clubhouse.

Pasatiempo Golf Club is not just home to a wonderfully designed and challenging Alister MacKenzie golf course, but also the home club of American golfing legend Juli Inkster (see Did You Know section below).

Attempts over many years to "simplify" the course, and especially Mackenzie's original bunkering, were reversed in the mid-1990s. Tom Doak was commissioned as the lead architect in a restoration project that returned Pastiempo to its glorious best, and the bunkering to its most threatening.

On this wonderfully undulating, parkland layout, it's not just the often dramatic and splendid bunkering that needs to be reckoned with. Trees of many varieties pleasantly, though never too densely, line the generally good-width rolling fairways. On the back-nine, two deep barrancas (ravines) will need to be crossed on several occasions, not least in front of the green at the wonderful par-3 closing hole.

The back-nine in particular is where MacKenzie most assuredly tests your course management and shot-making, with elevation changes, sublime bunkering, barrancas and an occasional blind drive all in the mix. The luxury housing around the course is unobtrusive, and where the layout climbs to its highest elevations you will enjoy picturesque views out to the Pacific Ocean.

As its name implies, to "pass time" at Pasatiempo is to indulge in one of those richly rewarding golf experiences that will stay long in the memory. Well worth the stop-over if you are on your way to or from Monterey.

Top U.S. professional golfer, Juli Inkster has enjoyed a long association with Pasatiempo. Growing-up near the course she developed and honed her skills here, before setting out on an illustrious and highly successful career as one of top women golfers of the modern era. A very well-presented cabinet in the clubhouse displays many of her trophies and provides an excellent insight into her achievements.

Alongside the Inkster display, is another cabinet featuring the life and work of the course designer Dr Alister MacKenzie. In addition to Pasatiempo, another of his "local" designs is Cypress Point, while farther afield, Augusta National and the West Course at Royal Melbourne are listed amongst his finest works. MacKenzie lived the final few years of his life alongside the course at Pasatiempo.