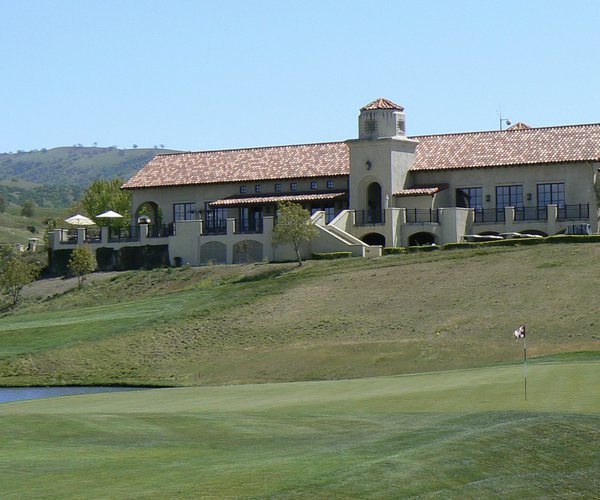 Above distances are for the Merlot-Chardonnay blend. The Zinfandel-nine, at 3535 yds from the back tees, is similar in length to the other two nines.

Trees are few and far between on this rolling, open and very natural terrain, where golf rather than real estate is all that's present. Each of the three attractive and equally testing nines - Zinfandel, Merlot and Chardonnay - contains an array of holes characterised by dips, slopes, valleys and ridges. Some follow the tops of the ridges, others are more sheltered down in the valleys. There are plenty of panoramic views onto the surrounding countryside (mainly used for wine-growing and cattle-ranching), especially from the higher elevations - but this too is where you will be most blown around on windier days.

Keeping to the generally good-width, but sometimes tightish fairways should be your number one goal. Beyond the first cut of light rough lies thick, ball-swallowing swathes of uncompromising grasses; beautiful to look at in the swaying wind, but as tough to hack out of in California as in Scotland.

Such is the naturalness and maturity of the golf course, and quality of the layout, one can be forgiven for thinking its as old as the surrounding hills themselves. Ask a member which of the three nines is the best, and they are likely to respond by asking you which of the three wine varieties is best - Zinfandel, Merlot or Chardonnay. Everyone has their own favourite.

Poppy Ridge is owned and operated by the Northern California Golf Association (NCGA) as a companion course to the Poppy Hills Golf Course, which is located further south on the Monterey Peninsula. Poppy Hills is the home of the NCGA, and also a stunning tree-lined, woodland golf course ... very different from the open, heathland-style of Poppy Ridge.