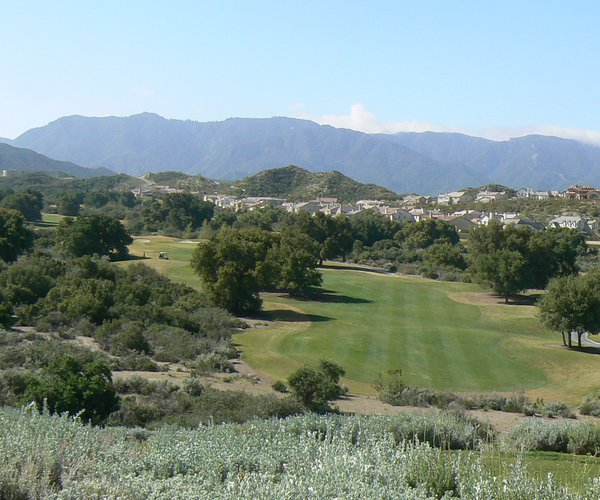 Above distances are for the Valley-Desert combination. Also at Sand Canyon is the Mountain-nine (par-35, 3211 yds from back tees), which is slightly shorter than the other two nines.

From interstate I-5, approx 6 mi south of Santa Clarita, join Hwy 14 (Antelope Valley Fwy) and head north. After 8 mi take exit 9 and head south on Sand Canyon Rd. After 1 mi turn left into Robinson Ranch Rd. After o.8 mi golf is in on your left.

Sand Canyon Country Club: Formerly known as Robinson Ranch Golf Club and previously home to the 18-hole Valley and Mountain courses, Sand Canyon nestles at the base of the Angeles National Forest. It is now a 27-hole set-up with the Valley, Desert and Mountain nines continuing to offer a very scenic and challenging test of golf.

The Ted Robinson (Snr and Jnr) designed course is based on a top-quality, challenging and undulating layout, which offers many stunning views onto the surrounding hills and mountains, and down into the Santa Clarita Valley. Rocky creeks, small ravines, a couple of ponds and longish carries over desert waste all feature in this exciting layout. After the relatively open terrain of the first six or seven holes, culminating in the excellent and bunker surrounded par-3 7th, a scattering of mature oak trees provides a slightly more tree-lined feel to many of the remaining holes.

The back-nine loop takes you up and into a scenic valley, flanked by tree and bush-clad hills on one side, and some unobtrusive housing on the other. As you start your way back down at the par-5 13th, a sign joyously proclaims "Welcome to Death Row!", which says something about the challenges of the closing six holes. There are several testing tee shots to be played on this excellently maintained layout, which achieves a great balance between desert-like and parkland features. Both the 9th and 18th holes finish just below the clubhouse, straddling either side of a decorative waterfall and fountain adorned pond.

It's apparently a coincidence the originally called Robinson Ranch layouts were designed by Ted Robinson (Snr and Jnr), but no coincidence this course is a highly-regarded member of an excellent array of public-access courses found to the northwest of Los Angeles.

Sand Canyon Country Club, formerly known as Robinson Ranch Golf Club, was caught up in the extreme drought and the destructive Sand Canyon fire of 2016. New owner Steve Kim subsequently spent millions of dollars to bring this excellent golf course back into play, on a 27-hole rather than 36-hole basis.

The course is laid out in the north-western foothills of the San Gabriel mountains, one of many rugged mountain ranges that border the city of Los Angeles. The San Gabriel range has several peaks over 9,000 feet, the highest being Mount San Antonio (aka Mount Baldy) at 10,064 feet. The foothills are grassy and rather barren, but the land becomes rockier and forested with oak, pine and cedar at higher elevations.

Course designers Ted Robinson and Ted Robinson Jr, are a father-son golf design team, based out of Laguna Beach, Orange County, California. Over the last 50 years they have completed more than 180 projects scattered throughout the Western United States, Hawaii, Mexico and Central America, as well as some designs in Japan, Korea and Indonesia.