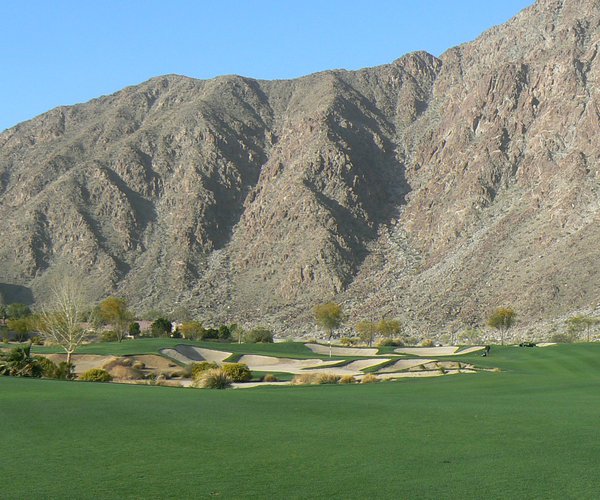 From I-10 just north of Indio, take the Jefferson Street exit and head south on Jefferson Street. After approx 5 miles turn right onto Avenue 52. After 1 mile turn left into SilverRock Way and follow signs to golf.

SilverRock Resort: In the Coachella Valley, the neighbourhoods of Palm Springs, Palm Desert, La Quinta and the like, are already home to a stunning array of golf courses. Stretching the area's reputation even further are some fabulous new arrivals - among them the Arnold Palmer designed course at SilverRock. Created for top professionals and keen amateurs alike, the smooth, open lines of the course are in sharp contrast to the jagged sides and peaks of the Santa Rosa mountains, which rise up directly beyond the course's western boundary. The good-width, well-groomed fairways, laid out with plenty of desert rough between them, are often defined by ominously large, open bunkers, which also feature strongly around the greens. Occasionally a small lake or the Coachella Canal also presents a fairway-hugging threat. The canal, which winds its way through the back-nine loop, dangerously flanks the very long par-4 15th, one of the toughest holes on the course. Most holes contain plenty of contouring, even if there are no major elevation changes to cope with. Large tamarisk trees put in an appearance at the dog-legging par-4 5th, a rare departure from the layout's generally open, desert terrain. The marble-like hills with their subtle tones of red, white, green and brown, beautifully complement Palmer's skilful interplay of smooth-lined fairways, large but not overly deep bunkers and nicely presented desert areas. Nowhere is this more evident than at the bunker-laden par-4 4th and the exquisite par-3 8th.
List of courses: Palm Springs / Palm Desert

The master plan for the SilverRock Resort includes a second 18-hole championship golf course, a world-class practice center, retail venues, luxury and boutique hotels and a convention center (most of this still to be constructed). >> In January 2008 SilverRock's Arnold Palmer course became one of the four host courses for the PGA Tour's Bob Hope Chrysler Classic. Arnold Palmer himself, a part-time La Quinta resident, won the event 5 times (see our Tournaments section > by Tournament > Bob Hope Classic). >> The Clubhouse, situated amongst some rocky outcroppings, is a charming renovation of the former working-ranch hacienda, built by Mr & Mrs Howard Ahmanson of Home Savings & Loan renown.