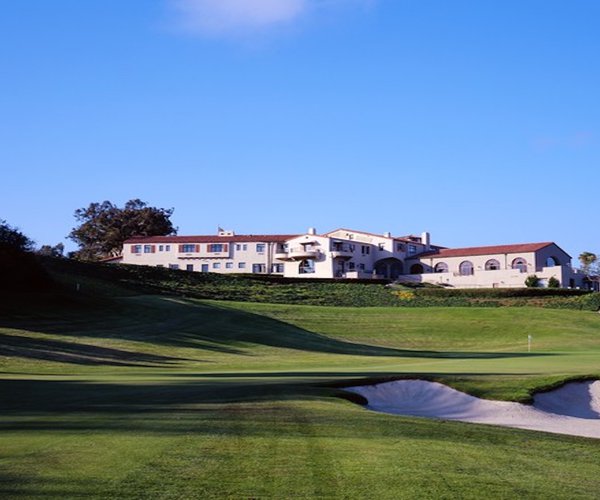 From I-405 take the Sunset Blvd exit and turn left (if going north on I-405), or right (if going south). Head west on Sunset. After approx four miles turn left into Capri Drive. Proceed down the hill until you reach Riviera GC.

The Riviera Country Club: This private club, the preserve of its members and their invited guests, is home to one of California's finest and most renowned golf courses. The layout here is perennially included in listings of America's 100 greatest courses. Established in 1926 the course quickly became noted for its spectacular beauty and uniquely challenging design.

The masterly layout of George C. Thomas is consistently maintained to the standard set by club founder Frank Garbutt, who declared, "Only the best is good enough." The finishing hole is a world-class 454-yard par-4 that plays to an elevated fairway. The long second shot must then hit a narrow green, which nestles in a natural amphitheater beneath Riviera's impressive clubhouse.

The course has long been known within golfing circles as “Hogan’s Alley”. The nickname was bestowed by Jimmy Demaret after Ben Hogan notched-up three victories here within the space of 18 months. His haul comprised the 1947 and 1948 Los Angeles Opens and the 1948 U.S. Open.

Riviera remains one of golf’s genuine classics. The course layout may not have changed too much over the years, but remains as compelling and testing as it was on the day it opened.

The Riviera Country Club is a private club. Guests may only play if hosted by a member.

Riviera Country Club has hosted many prestigious and top-level golf tournaments including the US Open Championship, US PGA Championship, US Senior Open and several Los Angeles Opens (see our Tournaments section >by Venue >Riviera CC).