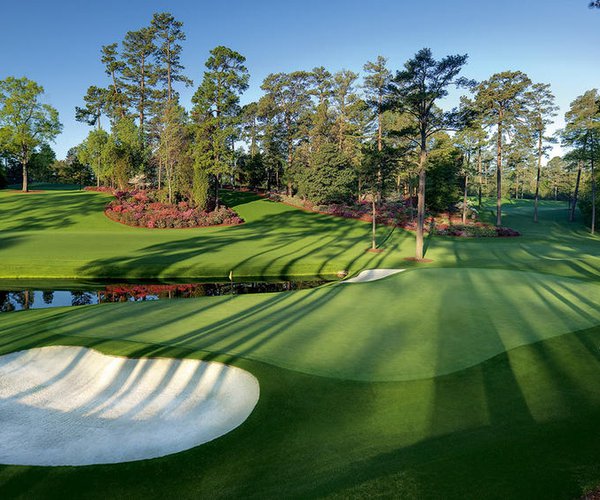 9-hole par-3 course (1,060 yds) with many holes played over or alongside DeSoto Springs Pond and Ike's Pond.

Augusta National Golf Club is home to a championship golf course that ranks with the world's very best. Of the lucky few who have played here, many would say IT IS the world's best. Only the Old Course, St Andrews and Pebble Beach can boast the "household name" status that is enjoyed by Augusta National.

Here you will find one of the United States' most admired tree-lined parkland layouts. Sweeping undulating terrain, Rae's Creek, lightning fast greens, dazzling white-sand bunkers and pristine rolling fairways all play their part. Water does not come into play on the front nine, but most surely does on the second nine-hole loop. Also on the closing nine is the potentially card-wrecking Amen Corner (holes 11, 12 & 13).

The outstanding array of excellently crafted and challenging holes are laid out on what was formerly a plant nursery. Each hole take its name from a tree or shrub variety that was previously cultivated here. Among some of Augusta's most famous "long" holes are the right-to-left doglegging par-4 10th (Camellia), and the back-nine par-5s at 13 (Azalea) and 15 (Firethorn). Both these water-defended par-5s offer rare birdie opportunities for big hitters. Escaping with par is what really matters at the water-defended "short" holes on the back-nine: the par-3 12th (Golden Bell) and par-3 16th (Redbud). A golf shot known the world over is the drive at the closing par-4 18th (Holly); threading through the eye of a needle is what's needed.

A tee-time at Augusta National is one of the most sought after in golf, but one most golfers can only dream about. Based on an almost exclusively male membership, this golf club is private, and that's with a capital "P". To experience Augusta National, the best solution is to acquire an entry "badge" and attend The Masters tournament as a "patron". But that in itself will typically require "connections" and deep pockets, or a good deal of luck in the annual ballot.

Augusta National is a private club. Guests may only play if hosted by a member.

The Masters Tournament, the season's first major championship for male golfers, has been played on this fabulous Alister MacKenzie-Bobby Jones designed course since 1934. Bobby Jones launched the event together with the then Chairman of Augusta National, Clifford Roberts. The winner's famous green jacket, has been donned by many of the world's greatest golfers, but nobody has a bigger collection in their wardrobe than six-time winner Jack Nicklaus.