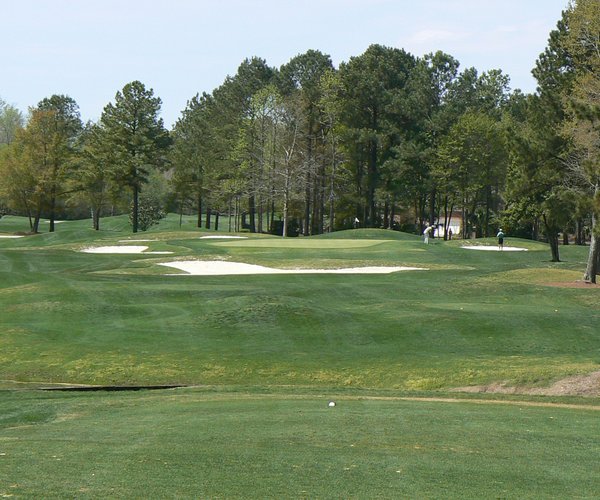 Travelling north from Myrtle Beach on US Hwy 17, you will cross the border into North Carolina. Continue on Hwy 17 for approx 8 miles and then turn right into Ocean Ridge Plantation. Follow road to clubhouse. (Note : Tiger's Eye clubhouse is 100 yards just beyond clubhouse for Panther's Run and Lion's Paw. Leopard's Chase clubhouse is in a different location).

Ocean Ridge Plantation (Lion's Paw Golf Links): Ocean Ridge Plantation is the land of the Big Cats. With courses bearing the names and paw prints of the Tiger, Panther, Leopard (and a Jaguar on the way), the Lion is the oldest of this feline collection, and one whose habitat has become a tad less natural, as residential properties have developed around the course perimeter.

However, the essentials of Willard Byrd's solid design remain, and this is still a course that can summon up a roar or two, as it tests and challenges your game. The course combines many holes bordered by pines or woodland swamp, with a much more open section in the middle of the front-nine and towards the end of the back-nine. Good bunkering and mounding protect the not overly large greens.

On the back-nine water is a more frequent feature around the greens and running alongside the fairways, much more so than on the front-nine. Oyster shells are used to accentuate some of the water hazards, not least on the very good par-3 3rd, and the water surrounded mid-iron par-3 17th.

Like many a mature lion, this layout exudes an air of solid dependability. It certainly has its moments, as at the very good looking par-5 8th, but it doesn't purr with visual interest in quite the same way as some of its more recent big cat neighbours.

Lion's Paw is the original big cat that launched golf at Ocean Ridge back in 1991.