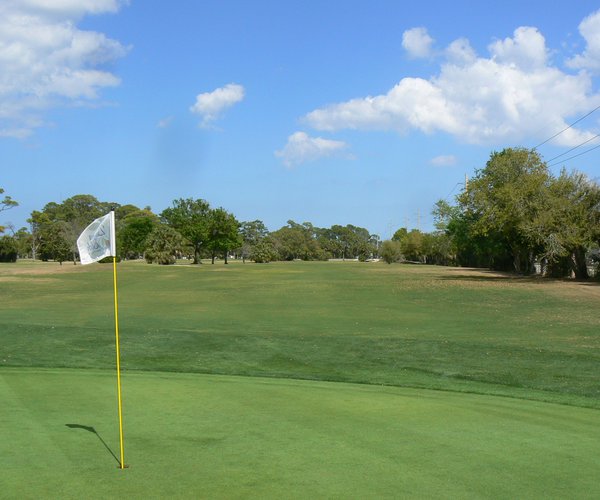 Daytona Beach Golf Club (South course): Run as a municipal facility, Daytona Beach Golf Club is located just a mile or so from the centre of Daytona Beach - the Club boasts (by some margin) the area's first golf courses - although the now better North course was revamped in the late 1990's, the South still carries the enviable honour of being an original Donald Ross design - whereas the North is a mix of tree-lined and more open holes, the South is predominantly an open, relatively flat layout, with some stretches lightly lined by palms and pines - most holes are quite straight, with only a couple of gently doglegging par-4s - although bunkering is largely absent from the relatively flat fairways, you'll regularly find a pair of bunkers guarding the entrance to the slightly elevated, small, round greens - one or two ponds provide an occasional watery threat, as at the front of the short par-5 10th green and alongside the fairway of the par-5 4th (one of three holes played on the other side of a railway track) - although the North course, especially after its 1990s rebuild, is regarded as the more interesting and challenging of the two courses, many are still swayed by the cachet of the South's heritage as a Donald Ross design (although admittedly not one of his most highly regarded or celebrated).
List of courses: Daytona Beach, FL