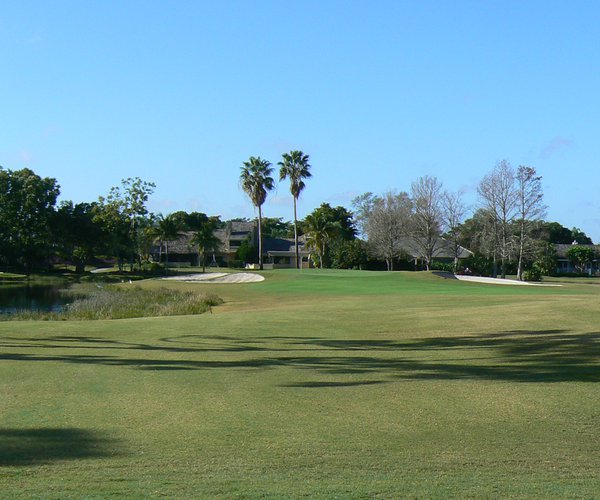 The Fazio Course at PGA National

The Fazio Course at PGA National: Originally designed by George and Tom Fazio, the course that now bears the designers' name was formerly called The Haig, in honour of Walter Hagen. It was the first of the five PGA National courses to open, and has recently been revamped by Tom Fazio II.

Weighing in at just over 7,000 yards from the tips, The Fazio, in keeping with its PGA National peers, lays down an attractive golfing challenge that will thoroughly test all aspects of your game. With the course arranged in two nine-hole loops, the front-nine starts and finishes alongside PGA National's Fazio driving range. The opening par-5 snakes its way dangerously between water left and right. Thereafter the presence of fairway-lining ponds should come as no surprise, though they are not as ever-present as on other members of the excellently maintained PGA National quintet.

The Fazio's generally good-width, flattish fairways are well bunkered, with the threat from sand-traps increasing as you approach the excellent quality greens. Whereas the front-nine expansively loops its way around the housing, the back-nine is characterised by pairs of holes that cut a wide swath through the residential areas. Especially on the back-nine, aiming a touch right towards lightish rough and hole-separating pines, oaks and banyan trees, is a better strategy than straying too far to the left, where the housing is often in range.

Among many attractive and memorable holes, the par-5 12th plays to a green defended by water and three leftside lateral bunkers, while the green on the long par-4 18th presents a testing target, pleasantly framed by palms and PGA National's largest lake.

Now called the Fazio, this course was originally named after Walter Hagen. The Haig as he was often known, was the king of the recovery shot and one of professional golf’s greatest players. His haul of 11 Majors is the third highest among golfers (behind Jack Nicklaus and Tiger Woods).

Hagen won the US Open twice and in 1922 became the first native-born American to win the British Open, which he went on to win four times in total. He also won the US PGA Championship five times (1921 and 1924-27), chalking up 45 PGA wins in his career. He was a six time Ryder Cup captain.