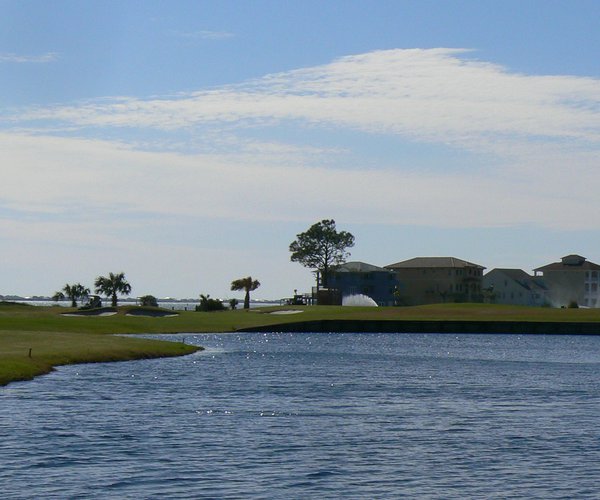 Tiger Point Golf & Country Club: Built alongside the wonderfully scenic Santa Rosa Sound, Tiger Point once featured two adjoining championship courses - after a pounding from hurricanes of the mid-2000s, golf is now available on the East course - the West course is undergoing a gradual restoration, which has seen nine holes brought back into play (as of 2009) - the out-and-back layout of the East course provides the opportunity for many scenic waterfront views, and a chance to test your game against a relatively open, Scottish links-style layout - two testing and water-defended par-3s feature among the first four holes; they will serve as good preparation as you progress to the short par-4 5th, with its water-surrounded island green - Tiger Point exudes a holiday golf feel much of the time, with its frequent views out onto the expansive Sound, and holiday homes and villas flanking several holes - the course becomes a little more tree-lined and housing a bit more noticeable on the 9 thru' 12 loop of holes, before linksy openness and sea breezes come rolling back in at the par-5 13th - maintenance here is good without being immaculate, perhaps unintentionally imbuing a linksy rusticity on parts of the course, not untypical on the average Scottish links - the rough may not be as penal as in Scotland, and no holes rub shoulders with the beach, but water will be a fairly constant companion - plenty of small ponds and water channels run alongside the good-width, flattish, uncontoured fairways and threateningly sidle up to some of the large and sloping greens.

Tiger Point's 18-hole par-71 West Course (6737 yards from back tees) was closed after being hit by hurricanes in the mid-2000s. By Feb 2009 nine holes had been re-opened for play, as part of the course's restoration. The full 18 are due to open by 2010. | Tiger Point is a member of the Emerald Coast Golf Trail and was the venue for the PGA Tour's final Pensacola Open in 1988.