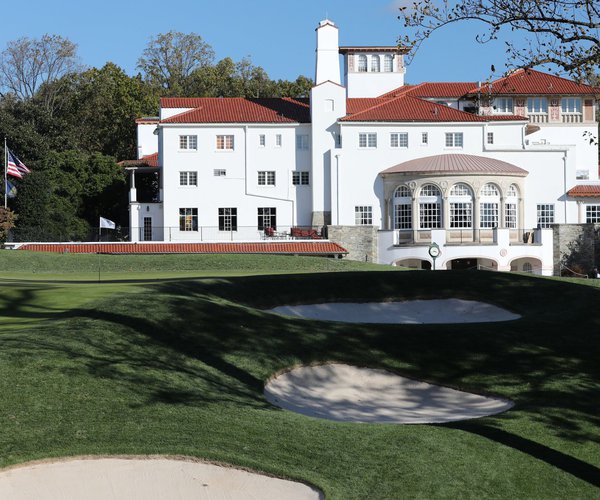 Above distances are for the Blue course. Also at Congressional is the also excellent 18-hole Gold course (par-71, 6844 yds from back tees).

Private and much revered, Congressional Country Club (known to its members as "CCC") is home to two excellent 18-hole parkland golf courses. It has also been (and still is) a golfing sanctuary to U.S. Presidents, Senators, Congressman, top government officials, wealth creators, oil barons and other members of Washington's elite. The highly-ranked Blue course is as good a parkland layout as you'll find anywhere in the world. Keeping it company is the also highly rated and pleasantly testing Gold course.

One imagines the outstanding Blue course owes as much to Robert Trent Jones Sr's 1957 redesign, as it does to Devereux Emmet's original 1924 layout. In classic Jones style, many holes play downhill to good width fairways from wonderfully elevated tees, then back uphill to heavily bunker-defended elevated greens. Each hole appears easy-on-the-eye, but laced with golfing challenges. The bunkering along the way is bold and plentiful, while blind shots are kept to an absolute minimum.

This gently undulating and pleasantly open parkland layout is home to a wonderful variety of mature trees that handsomely define the holes, but never too densely. Water puts in only one telling appearance on the front-nine, greenside at the par-5 6th. On the back-nine water is again sparingly used, but can't be ignored at the 10th, 11th and 18th holes.

Pick of the holes: played in front of Congressional's iconic and palatial clubhouse, the par-3 10th and par-4 18th both make good use of the same attractive pond. From elevated tees the 10th plays away from the clubhouse, demanding a tee-to-green carry over water to a wide but shallow green. Coming back to the pond from the opposite direction, the peninsula green of the par-4 18th poses one of the best risk-reward approach shots in golf, not least when the pin is positioned at the far end of the promontory.

Members' guests permitted to walk if accompanied by caddies. Caddies and forecaddies available at all times.

Congressional boasts the largest Country Club clubhouse in the United States. This iconic and labyrinthine building is home to numerous excellent restaurants, bars, a ballroom, and fabulous collections of golf artwork and memorabilia.