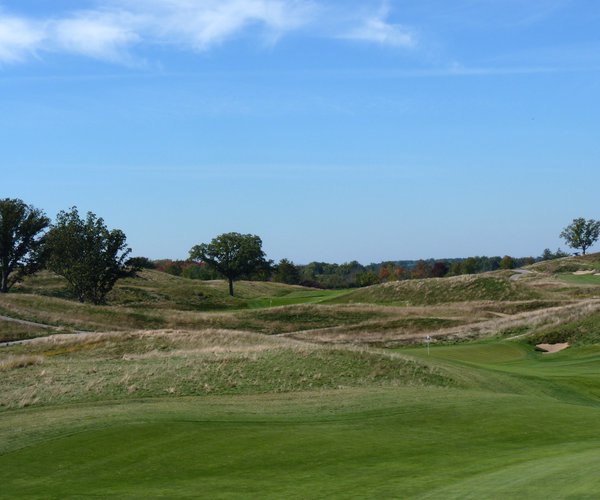 Erin Hills sits amongst gently rolling farmland and woodland to the northwest of Milwaukee. The undulating landforms hereabouts were originally shaped by receding glaciers, as part of Wisconsin's Kettle Moraine region. Now the tumbling terrain, with its mounds, ridges, kettles and wetlands, is home to one of the most talked about new courses in America. The USGA were sufficiently impressed with this linksy big-dimension layout, they awarded it the 2017 U.S. Open Championship.

The layout at Erin Hills is open and undulating, stunningly natural and ruggedly handsome. No houses or roads will disturb your round. The most notable structure you'll see (besides the onsite Lodge and clubhouse) is the imposing twin-towered basilica that sits atop Holy Hill, a few miles to the east. At the long par-5 18th you play back to the stone-built luxury Lodge, with the basilica giving the hole a wonderfully memorable backdrop.

All 18 excellently crafted holes provide a visually arresting and authentic links golf experience (albeit without Sir John Betjeman's "seaweed smells" and "Atlantic waves"). A sense of space and openness is ever-present. The fast-paced good-width fairways roam across the undulating fescued dunes in two nine-hole loops. A plethora of rugged-looking bearded bunkers will need to be avoided as you progress to the often elevated putting surfaces. Around the greens you'll find a testing mix of deep fescue grass, plenty of bunkering and slick roll-off areas.

Erin Hills is one of a number of high-profile public-access "retro-links" courses to hit the headlines in recent years. Although its peers (including the likes of Whistling Straits, Arcadia Bluffs, Chambers Bay and Bandon Dunes) are all scenically located oceanside or lakeside, the absence of a waterside setting doesn't detract from the pleasures and challenges of Erin Hills.

Erin Hills is a walking-only course. Golf carts or pull trolleys are not permitted. Use of a caddie is recommended, but not compulsory.

From many parts of the course, not least looking down the 18th hole, you get a fine view of nearby Holy Hill, one of the highest points in southeast Wisconsin (approx 1,350 feet above sea level). Sitting atop this tree-clad hill is the impressive twin-towered basilica of Holy Hill National Shrine of Mary, Help of Christians.

Erin Hills has hosted many top level tournaments, including the 2011 US Amateur Championship. In 2017 the club will host the US Open Championship in 2017. For more details see Top Golf Tournaments at Erin Hills Golf Club.