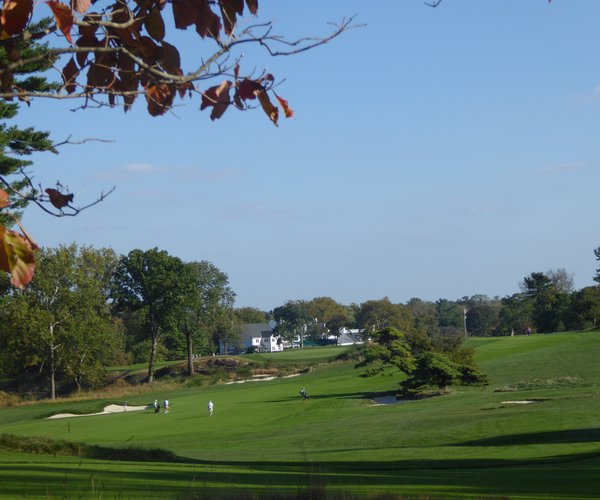 Merion Golf Club is home to two championship layouts, the world-renowned East course and the also impressive West course. In the East course you will find one of the United States' most admired tree-lined and open parkland layouts, with an outstanding array of excellently crafted and challenging holes. However, this is a very private course, playable only by its members and their invited guests.

Designed by Hugh Wilson, an unknown course designer at the time, Merion’s East course has played host to more USGA Championships than any course in America. It was here that the great Bobby Jones completed golf’s elusive Grand Slam at the 1930 U.S. Amateur. Here that Ben Hogan hit his legendary one-iron on the 72nd hole during the 1950 U.S. Open.

The sculpted greens, fairways, and treacherous bunkers of Merion have shaped its reputation. And so too the wicker basket flagsticks, the origins of which remain a mystery. By the summer of 1915, William S. Flynn, at the time Merion's superintendent (and later to become a celebrated course architect), received patent approval for his wicker basket design. Merion had baskets from that point onward.

Excellent practice facilities are located at the East course.

Merion Golf Club came into being in 1896, when members of the local Merion Cricket Club (est. 1865) decided to open a golf course in Haverford. In 1910 the club commissioned one of its members, 32-year-old Hugh Wilson, to design a new course for the club, to replace the existing course.

After extensive discussions with the "father of American golf course design" Charles Blair Macdonald, and a seven month trip to study many notable layouts in England and Scotland, Wilson designed what would become Merion's famed East course. Two years later he also designed the West course.

Merion has hosted 19 USGA championships (mostly on its famed East course), more than any other golf club in the country. The club's Roll of Honour includes Walker and Curtis Cups, US Open and US Amateur Championships, US Women’s Amateur, US Girls’ Junior Amateur and Men’s World Amateur Team Championships (see our Tournaments section >by Venue >Merion GC).