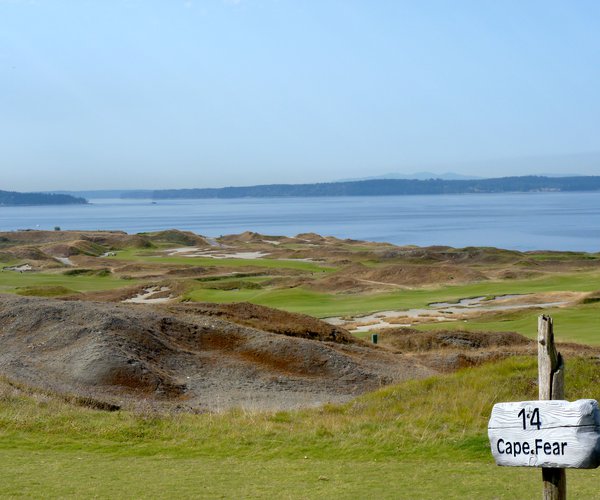 Chambers Bay Golf Course: Of the modern generation of American links golf courses, Chambers Bay is as authentic and thrilling as they come. Now a U.S. Open Championship venue, this wonderfully expansive layout is built in a large former gravel quarry. It sits directly alongside a railway (all the best links courses do!), overlooking the spectacular South Puget Sound. To the west, stunning sea and island views abound. Look the other way and the quarry reminders are clear to see.

The largely treeless layout weaves through towering dunes. Like most classic links courses, you play over constantly undulating terrain, best described as rugged and dramatic, rather than impeccably manicured. Miss the huge rolling greens by a few inches and your ball may be carried 50-yards away, courtesy of close-cropped and sometimes vast green surrounds. On the greens themselves, don't think for a moment that you'll routinely get down in two, or even three, or .....

Robert Trent Jones Jr's layout contains a rich bounty of unforgettable and classic links golf holes. Most are accompanied by undulations, elevation changes, vast sprawling bunkers, mischievous pot bunkers, fescued mounds, huge teeing grounds and every other links golf attribute you care to imagine. The short par-3 15th tips its hat to Cypress Point. Played directly out to the Sound, a lonesome pine stands aloof on a rocky peninsula behind the green.

Although a municipal course (as is the Old Course, St Andrews), the visitor green-fee is still to be counted in the hundreds of dollars, especially when a caddie fee is added in. But once paid, forget the cost. Just go out there and enjoy one of America's great links golf courses, and the breathtaking South Puget Sound views that come with it.

Chambers Bay is a walking-only courses. Golf carts available only for golfers with a permanent disability (48 hrs prior approval required; caddie compulsory for cart users). Caddies available at all times; not compulsory but strongly recommended to enjoy the full Chambers Bay experience. Pull-trolleys available if a caddie is not used.

Spectacular seaside "links" golf, on a daily-fee basis, has always been abundantly available to North Americans. The only problem was, that until the year 2000 it mainly involved a trip "across the pond" to Britain or Ireland. That all changed in just a few short years either side of Y2K.

Kiawah's Ocean course (1991) may have been the trigger. But the recent "Golden Age" of retro-style links golf really took-off in 1998 with Whistling Straits, a "seaside" course that hugs the shoreline of mighty Lake Michigan. On the other side of the lake, Arcadia Bluffs hit the scene in 1999, as did Bandon Dunes on the Pacific coast. In the mid-2000s, Erin Hills (admittedly not seaside, but could be!) and Chambers Bay kept the links treasures coming. More recently in 2012 Canada joined the party with Cabot Links. No longer can the Brits and Irish boast a monopoly on spectacular seaside links golf (.... for the daily-fee golfer).