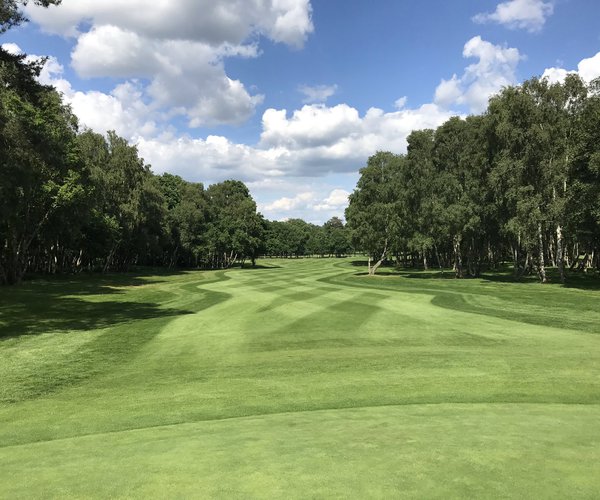 Army Golf Club, home to a pleasant tree-lined parkland layout, is located close to Aldershot, a garrison town and the "Home of the British Army". Although the club has military origins, for many years it has had a predominantly civilian membership.

The course is situated on 165 acres of low, undulating woodland between Farnborough and Aldershot. Included in the par of 71 are three par-3s and two par-5s. Today's course layout was established in the 1960s, with mature trees and rhododendrons bordering many of the fairways, and providing a blaze of colour in the spring.

Several bridges on the course span water ditches that either run alongside or across some fairways. Each bridge bears the cap badge of a different British Army regiment.

Visitors welcome on weekdays; contact Club Mgr if wanting a weekend round.

In 1883, 1st Battalion, The Cameronians, was serving in Aldershot. As a Scottish regiment, there would certainly have been golfers amongst them. Their officers were members of the Royal Aldershot Officers’ Club, and may well have been responsible for a ground swell of interest in golf, as evidenced by a paragraph in ‘The Surrey and Hants News’ on Oct 13, 1883. The short paragraph read: “GOLF: it is proposed to establish a Golf Club on the Aldershot Camp. Officers interested are requested to communicate with Lt Col Sartorious VC (Deputy Assistant Quartermaster General) on the arrangements to be made.”