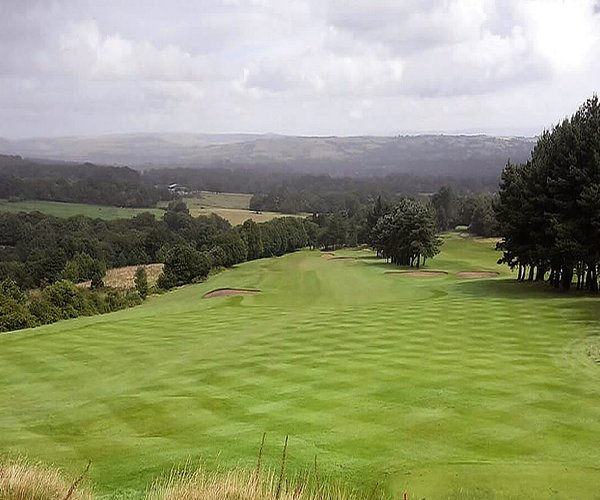 From the M61 motorway south-west of Bolton leave at exit 5 and follow the A58 direction Bolton. After o.7 miles turn left at traffic lights into Beaumont Road (still the A58). After 2.5 miles at roundabout turn left onto the B6226 Chorley Old Road (Montserrat Brow). After o.3 miles golf entrance is on your right.

Bolton Old Links Golf Club: This excellent and relatively open, moorland golf course was opened in its present form in 1924 and owes much of its layout and design to the famous golf architect Dr Alister MacKenzie (responsible for Augusta National amongst other famous courses).

The front-nine is played as an anti-clockwise inner loop of holes, enclosed within the very scenic and enjoyable back-nine, which run clockwise around the opening holes. With many straight holes, and only the par-4 18th having anything of a pronounced dog-leg, neither drawers nor faders of the ball should have too much difficulty with this layout. However, wayward hookers and slicers will need to contend with thick moorland grassy rough, as well as many strategically placed fairway and greenside bunkers.

Mackenzie's design adheres to his basic principle of keeping the layout in harmony with its natural environment, in this case emphasising the natural features of the undulating moorland terrain to produce a series of colourful and testing holes. With parts of the course reaching 750-850 feet (270-310 m) above sea level, you can reasonably assume that the wind will be a factor in your round, although its direction could be anything but constant.

Founded in 1891 and known as Bolton Golf Club, the club's original facilities comprised a nine-hole layout located in Green Lane, Bolton. Five years later the club transferred to its current Smithills location on the edge of the West Pennine Moors. In 1912 a number of members left the nine-hole Smithills-based golf club, in favour of a new eighteen-hole golf course that was being laid out at Lostock Park, two miles away. They took the club name with them, while the members who remained at Smithills adopted the name Bolton Old Links.

Following the Old Links acquisition of 173 acres of land in 1921, a complete reconstruction of the course was undertaken. Dr Alister MacKenzie of Leeds, the notable golf course architect, designed the new layout, which was opened in 1924. This formed the basis of the present layout.

MacKenzie's design measured 6,096 yards. A number of changes, particularly after the Second World War, resulted in the course being lengthened to 6,470 yards off the Championship tees. However, the essence of the course designed by Dr MacKenzie remains.