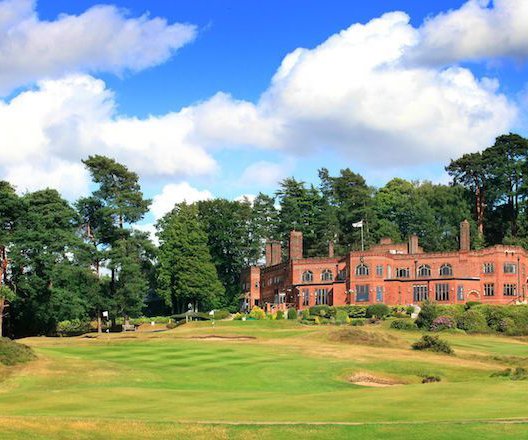 Above distances are for the Red-Blue combination. The Green-nine is slightly shorter than the other two nines.

St George's Hill Golf Club: Located in one of London's most prestigious "stockbroker belt" residential estates, St George's Hill Golf Club is home to a highly regarded golf course. The predominantly tree-lined 27-hole parkland layout, still exudes some of its original open heathland character, although tree-growth over the years has created something more akin to a "wooded heathland" feel.

Comprising the similar length Red and Blue-nines, and the slightly shorter Green-nine, here you will be challenged by a majestic, wooded heathland layout, crafted by the great Harry Colt. Occupying a wonderfully quiet and mature woodland setting, the fairways are invariably lined with tracts of ball-grabbing heather as well as rhododendron bushes aplenty. Staying out of both these "natural hazards" is a clear priority. Avoiding the many pine, birch and oak trees that line the holes will also serve you well.

The pleasantly undulating terrain provides several elevation changes, as well as one or two occasional blind shots. Among a wealth of excellent holes, you may find the long par-3s that feature on each of the three nines to be the most testing and most memorable.

Visitors welcome at various times on weekdays; no outside visitors on weekends.

Players generally walk this course. A few ride-on-buggies available for hire for medical reasons only. Caddies available if pre-booked.

St George's Hill takes its name from England's patron saint, the swashbuckling St George, legendary slayer of fire-breathing dragons. | The county Surrey (together with neighbouring Berkshire) is home to the UK's largest concentration of heathland golf courses. Between 1890 and 1910, as the game of golf rapidly developed throughout Britain and Ireland, land was sought for the creation of many new golf courses. The fast-draining, gently undulating, open heathland, found in Surrey and Berkshire, was considered ideal for the creation of golf courses to serve the nation's capital and its surrounds. The likes of Sunningdale, Woking, West Hill, Worplesdon, Swinley Forest, New Zealand, St George's Hill and Walton Heath, were all established in these early days.