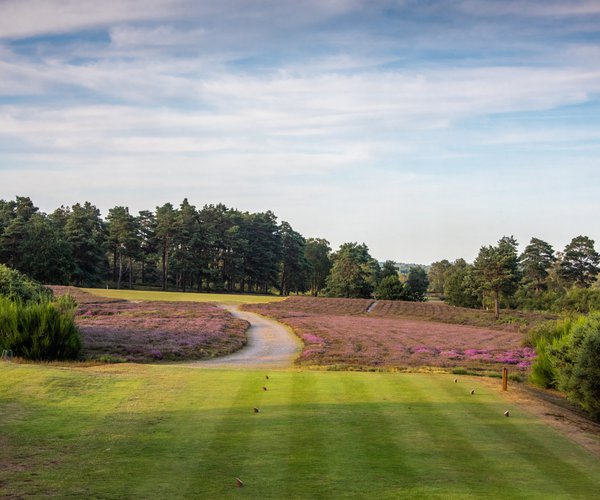 From the M3 motorway take exit 3. Follow the A322, direction Bracknell/Legoland. After 1.2 mi turn left onto the A30, direction London/Staines/Sunningdale. After 2.6 mi turn right into Cross Rd (look for small golf flag sign). After o.4 mi turn left. Golf is indicated 200 yards on your right.

Sunningdale Golf Club (New course): The New course at Sunningdale was designed by the club's first Secretary, the legendary Harry Colt, who had had already established a significant reputation as a golf course architect by the 1920s. Within Sunningdale's natural heathland habitat, he was commissioned to create a second golf course for the Club. Most would say Colt took his chance admirably, and created something rather special.

Like the Old course at Sunningdale, the layout swept across the wild and sandy heathland known as Chobham Common. To this day many sections of the New course remind us how ancient heathland can look when tree-growth is restricted, and the essentially open and rugged character of the heath is preserved. With more heather in play and tighter fairways, the New lays down as picturesque a golfing test as its older sibling. There are many splendid views onto the open heathland, and a collection of five par-3s that are the envy of many a top-ranking layout.

Sunningdale is first and foremost a golf club, and one of the best in England. Some of its close neighbours may have developed more of a country club or corporate business reputation, but Sunningdale remains resolutely a golf club. Amongst an enviable array of Surrey-Berkshire courses, there are few finer layouts on which to experience heathland golf than on the Old and New courses here at Sunningdale.

Visitors welcome on Mon-Thurs. No outside visitors on Fri-Sun.

In 1901, shortly after his unsuccessful application to become Secretary of the R&A, Harry Colt applied with 435 other hopefuls for the post of Secretary at the newly formed Sunningdale Golf Club. After an exhaustive selection process, Colt was appointed, securing the job at an annual salary of £150. He would later redesign the venerable Old course, and in 1922 designed the Club's New course.

Included amongst the Club's impressive list of former captains, you will find the Prince of Wales (later Edward VIII) and his brother the Duke of York (later George VI).