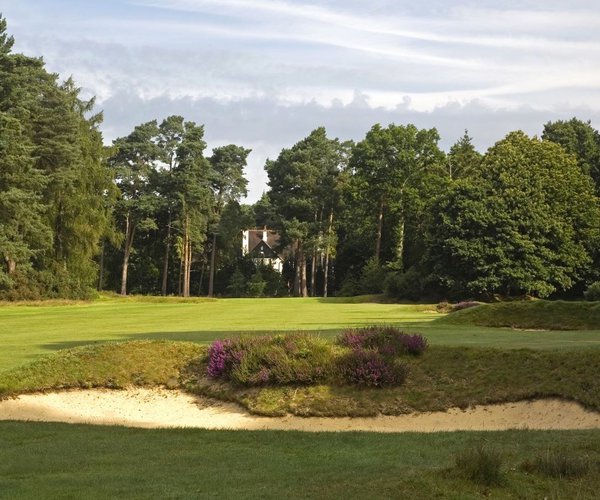 Heath House Road is accessed off the A322 Bagshot/Guildford Road, approximately 6 miles south of Bagshot (M3 - Junction 3) and 6 miles north of Guildford (A3).

Worplesdon Golf Club: In the north west of Surrey is a trio of courses known as the three W's - Woking, West Hill and Worplesdon. Each is an excellent ambassador for Surrey-Berkshire heathland golf, and at one point the three attractive wooded heathland layouts almost physically join (but not quite). Many would say Worplesdon just has the edge over the other two; others prefer Woking, and of course West Hill has a loyal following too. The differences between them are hairsbreadth.

Worplesdon, like the other two W's, is arranged over gently undulating sandy terrain. There are mature pines in abundance and plenty of heather lying in wait for those occasional stray shots. Many fine holes will challenge and delight on your way round, with perhaps a little more room to work the ball than at the other two W's.

Worplesdon's "signature hole" is the 10th, made particularly attractive in May when the rhododendrons are in bloom. This short par-3 demands a tee-to-green carry over Bridley Pond, the only water hazard of any note on the course.

Wandering effortlessly through its wooded heathland home, the layout at Worplesdon has remained largely unchanged since Abercromby's day when the golf course was carved from what was once a forest of pine, birch, gorse and heather.

Visitors welcome on weekdays; no outside visitors on weekends. Worplesdon is predominantly a 2-ball club; 3 and 4-ball play is only permitted at certain times.

Past Captains of Worplesdon include: David Frame (1961 Walker Cup player); HRH The Prince of Wales (later Edward VIII) who was Captain in 1933 and Arthur Balfour (UK Prime Minister 1902-05) for the first two years from the club's inception in 1908.