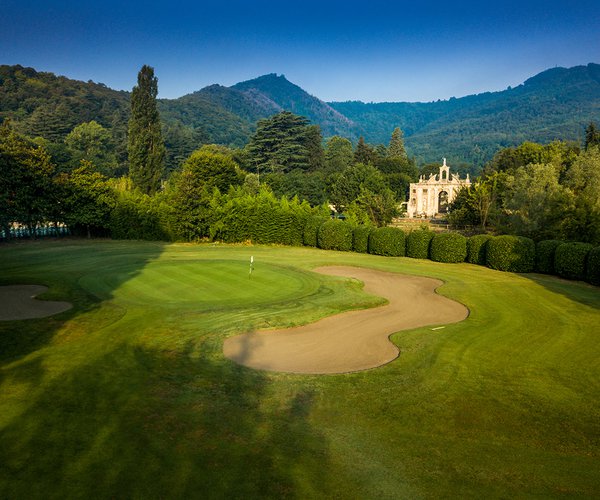 Above distances are for the Blu-Giallo nines. The newer Rosso-nine (3049 mtrs), is similar in length to the other two nines.

Golf Club Padova: Home to three excellently maintained and contrasting nine-hole loops, Padova Golf Club occupies relatively flat terrain at the foot of the Euganean Hills. In this tranquil rural setting, well removed from any intrusions from highways or housing, the original Blue and Yellow nines weave their way along avenues of nicely spaced, mature trees. In contrast, the newer Red-nine breaks out into more open countryside, where wine growing is clearly the key activity. Although two small lakes and several reed-covered ditches dangerously threaten the middle section of the Red-nine, additional earthmounding could have provided better definition to the holes, while perhaps giving a better view of the often "hidden" water hazards. The Blue/Yellow combination is predominantly played in a tree-lined, parkland environment, and appears to be the favourite combination with many members. A variety of rock-lined water features add plenty of interest to the Blue-course, whereas water is relatively absent on the Yellow-nine. One or two holes on the Blue and Yellow nines also benefit from modest elevation changes, although nothing as dramatic as the Euganean Hills themselves. Shakespeare may have been concerned with the "Taming of the Shrew" in his Padua-based comedy, but your round at Padova need be neither comic nor tame, in terms of carding a competitive score. Generally good-width fairways and relatively light, shallow bunkering provides an easy-going feel on many holes; while avoiding the water hazards remains the priority on the Blue and Red courses.
List of courses: Italy - North East

Visitors welcome on weekdays. Only members and their guests on weekends. Closed on Mondays.

Padova (in English, Padua) is reputedly the oldest city in northern Italy. Its dense network of arcaded streets lead onto large communal piazze, while many bridges cross the various branches of the Bacchiglione River. Shakespeare's "Taming of the Shrew" is predominantly set in Padua. Located a few kilometres to the south-west of the city, Padova Golf Club sits on the edge of the Colli Euganei (Euganean Hills), a group of volcanic hills that rise up from the flat, agricultural lands of the Padovan-Venetian plain. The Euganean Hills are celebrated for their picturesque beauty as well as their hot springs, which account for the area's many thermal spas and spa hotels.