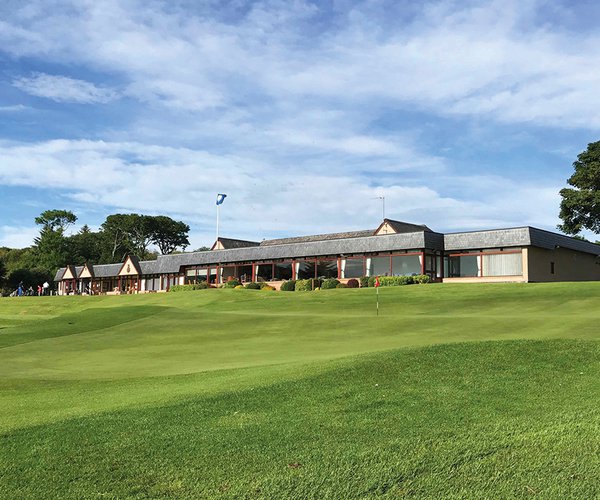 Duff House Royal Golf Club is pleasantly located on the banks of the River Deveron, next to the town of Banff. Just a short distance beyond the course, the river flows out into the North Sea. Originally designed by the great James Braid, and later modified by the even more revered Dr Alister Mackenzie, the layout boasts a distinguished architectural pedigree.

Laid out on relatively flat terrain, the course appears to derive more of its character more from its neighbour, the elegant Duff House mansion, than from the links-style courses typically found on Aberdeenshire's rugged north coast. Lightly tree-lined in places, more open in others, this well presented parkland course plays just under 6200 yards from its back-tees.

The par of 68 includes just one par-5 and five par-3s. The easy-going appearance, with relatively little rough to speak of, belies the challenges that you'll encounter along the way. The large "Mackenzie" two-tiered greens, many well positioned bunkers and some tree-lined fairways ensures a good and fair test for golfers of all abilities.

With one side of the course bounded by the river, care will be needed with your tee-shots at the 7th, 16th and 17th holes, where the river lies in wait for anything too wayward.

Although golf is thought to have been played in Banff for over 400 years, it was only in 1871 that a golf club was formally organised. The members of Banff GC played on the seaside Banff Links (a course that no longer exists). The club continued with varying degrees of success until the end of 1924, at which time the club merged with Banff's second golf society ... the Duff House Golf Club (the name of which was retained for the amalgamated club). Duff House Golf Club had previously been established in 1910, with its members playing on a strip of land alongside the River Deveron, which the Duke of Fife had gifted to the towns of Banff and Macduff. | Duff House Royal is one of 10 golf clubs in Scotland that received its 'Royal' prefix from a reigning British monarch. The Royal title was conferred on the club in 1925 by George V, following the patronage of Louise, Princess Royal and Duchess of Fife, George V's eldest daughter. The 10 Scottish 'Royals' are: Aberdeen, Royal & Ancient (St Andrews), Burgess, Dornoch, Duff House, Montrose, Musselburgh, Perth, Tarlair and Troon.| Adjacent to the golf course is Duff House, an 18th century William Adam mansion, filled with fine paintings, furniture, tapestries and artefacts drawn from the National Gallery of Scotland and several private lenders.