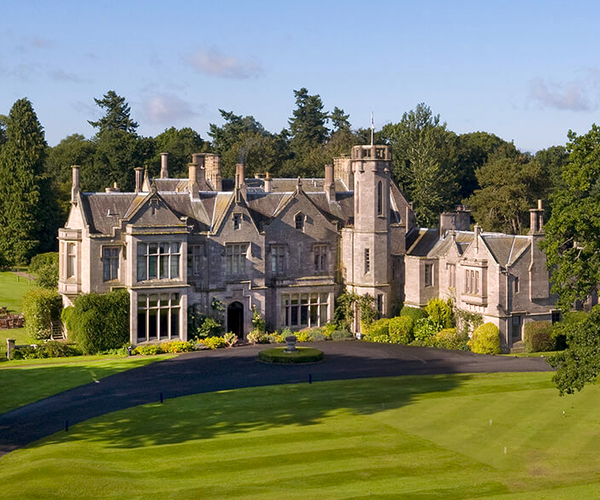 2 mi north of Jedburgh leave the A68 and take the A698 direction Kelso. After 6.5 mi, just as you enter Heiton, turn left direction Roxburghe Hotel (signposted). After o.3 mi the entrance to hotel and golf club is on your left.

The Roxburghe Hotel & Golf Course: Located in the rolling hills of the Scottish borders, The Roxburghe opened in 1997 and lays down a wonderfully scenic golfing challenge. Originally owned and operated by the Duke and Duchess of Roxburghe, the estate is now owned by a German Investment Management company, with the hotel now bearing the rather incongruous name of Schloss Roxburghe.

Designed in modern parkland style, the course offers generous width fairways, while the rough beyond them can be penal. The bunkers are impressively deep and numerous, with the generally large putting surfaces beset with testing slopes and borrows. With the possibility to stretch the course to well over 7,000 yards from the tips, the Roxburghe has hosted and will continue to host top level amateur and professional tournaments.

The layout's signature hole, the downhill par-5 14th, is one of the most photographed golf holes in England. From an elevated tee you play down to the banks of the River Teviot, the distinctively tall arches of a former railway viaduct providing a magnificent backdrop to proceedings.

On the Roxburghe's generally open and undulating terrain you will encounter a few longish green to tee walks, although overall this is not an an excessively tiring or physically demanding course.

From the course's signature hole (par-5 14th) the view is dominated by a stunning railway viaduct, which spans the River Teviot. You'll no longer see steam trains crossing the viaduct; nowadays it is walkers and cyclists who make use of this impressive Victorian structure.

The column you see in the distance from parts of the course is located on the edge of the border town of Coldstream. Sitting atop the column is a statue of Charles Marjoribanks, a former Member of Parliament for the County of Berwickshire (circa 1820).