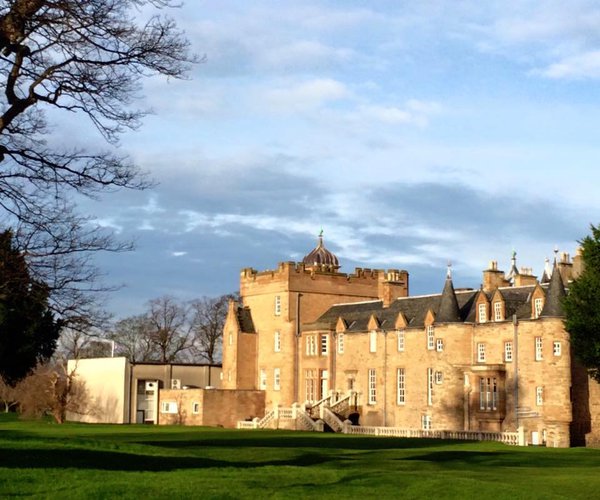 From the A1 / A720 (city ring road) interchange (Old Craighall Junction) east of Edinburgh, travel east on the A1 direction Berwick-upon-Tweed. After 3 miles take the A199 Tranent exit. Follow the A199 direction Musselburgh. After o.9 miles at roundabout take the 3rd exit onto B1361 direction North Berwick (ignore signs to Musselburgh Old Course). After o.5 miles golf is on your left.

The Royal Musselburgh Golf Club: Located within the walled grounds of the impressive Preston Grange House, is the home of one of the world's oldest golf clubs, Royal Musselburgh. Founded in 1774, the club might be ancient, but the golf course itself is much more recent, laid out in 1926. To the east are the mighty links courses of East Lothian, but here you'll find something distinctly different, a parkland course, almost garden-like - although there are opportunities to glimpse the sea.

Using every piece of available land inside the boundary wall, James Braid created a good layout, which is fairly flat at the outset, with more undulation evident on the back-9. The holes are given some further definition by recent tree-planting, but that still doesn't stop balls landing on adjoining fairways - be ready to respond to and give the customary shout of "fore" for those occasional wayward shots. The excellent bunkering is likely to catch a few of your drives and approach shots as you play your way round this very enjoyable parkland course.

Visitors welcome on weekdays and weekends; more restricted on weekends.

Royal Musselburgh is the sixth oldest golf club in the world, instituted in 1774 (although some accounts raise the possibility of 1760 as its foundation year). The members of Musselburgh Golf Club originally played on the Musselburgh Links Old Course, alongside other venerable golfing societies, including the Honourable Company of Edinburgh Golfers, Edinburgh Burgess (now Royal Burgess) and Bruntsfield. Musselburgh Golf Club moved to its new location in Prestonpans in 1925.