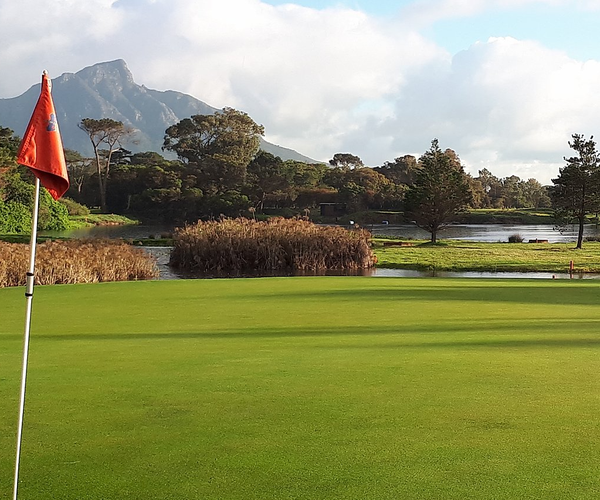 Royal Cape Golf Club: There should be no surprise that Royal Cape, the oldest golf course in South Africa, oozes plenty of history and a long record of golfing achievements. However, keeping up with the times is also important to such a prestigious Club, and this it has successfully done.

Although the terrain here is relatively flat and offers little in the way of elevation changes, Royal Cape remains well-equipped to challenge the best of golfers. The layout is laced with numerous water hazards, plenty of strategic bunkering and fairly tight, tree-lined fairways. At over 6,700 yards from the tips, and with the wind blowing (as is often the case), this venerable old course has tested the best over its long and distinguished past. There is a maturity and degree of difficulty here at Royal Cape that marks it out from many of the more contemporary courses on the Cape.

The tree-lined perimeter and adjacent railway line and roads, ensure that real estate is not much in evidence, and a natural environment is preserved throughout most of the course. While walking the pleasantly tree-lined fairways you can enjoy many fine views onto Table Mountain, away to the west.

Must book in advance. Proof of handicap / club membership required.

Non-metal spike facility. Golf carts available for hire (if pre-booked). Caddies available at all times. White socks must be worn to accompany shorts.

Royal Cape dates back to 1885, when it was founded by the then Governor of the Cape Colony, Lt Gen. Sir Henry Torrens. Three years later, Torrens became the Governor of Malta, where he promptly founded the Royal Malta Golf Club.

Waterloo Green at the Wynberg Military Camp was Royal Cape's first real home, where a rather basic course was established. As increasing numbers of civilians took up the game, it was decided to leave the Wynberg course to the military in 1891, the Club moving to its second home on Rondebosch Common. However, the Common was glebe land, open to the public for recreation, and so a third move was made in 1905 to the site currently occupied today.

Royal Cape is one of four golf clubs in South Africa honoured by exercise of the Sovereign's royal prerogative. The Royal titles were conferred on Royal Cape (1910), Royal Port Alfred (1924), Royal Johannesburg (1931) and Royal Durban (1932) by King George V.