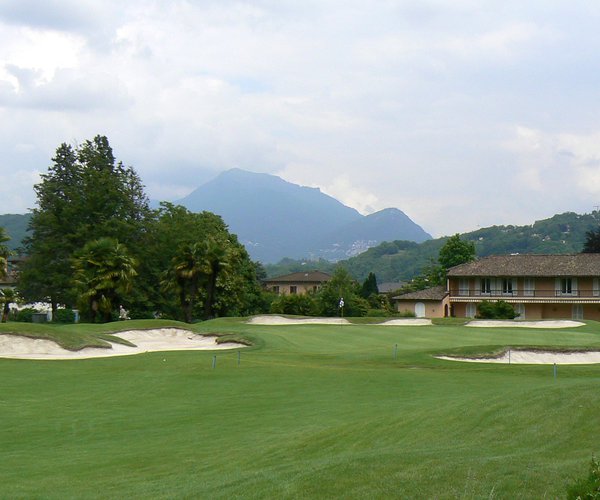 From Hwy 2 (E35), to the north-west of Lugano, take exit 49 (Lugano Nord) and cross over the bridge to the western side of the Hwy. Follow the Via Cantonale south, direction Lugano Airport / Magliaso. After approx 6 km, just after Magliaso, turn left into Via Boett and Golf Club.

Golf Club Lugano: Located alongside the village of Magliaso, a short distance inland from Lake Lugano, this often tight and technical layout demands accurate shot-making rather than brute force and power. Laid out on generally flattish terrain, the course is bisected by the River Magliasina, with almost half the holes played closely alongside or crossing over the river at some point. Although the river is not in play on the 10th and 11th holes, the start to the back-nine also contains its own potential water adventures, courtesy of two ponds that protect the approach to the green of the short par-4 10th. One of the ponds then needs to be carried at the good-length par-3 11th. On the few holes where water is not in play, attractive lines of mature birch and pine trees define and separate the fairways, ensuring the course has a pleasant parkland feel. Several holes take on a garden-like appearance where rhododendrons and azaleas provide extra splashes of colour around the course. Steep, tree-clad hills rise up in all directions beyond the course, contrasting with the layout itself, which occasionally includes some gentle undulations, interspersed between the predominantly flatter sections. Adding to the technical demands of this relatively short and at times compact layout, expansive, stylish bunkering is usually deployed around the generally large and undulating greens.
List of courses: Switzerland

Visitors welcome on weekdays and weekends. Course open all year.

Must book in advance (a busy course even on weekdays). Maximum handicap: 36.

In the south of the Swiss canton of Ticino, you will find a wonderful golfing triumvirate, comprising the golf clubs of Ascona, Gerre Losone and Lugano. Located a little further south than the other two golf clubs, Lugano straddles the River Magliasina in Magliaso, a village situated about 7 km from the city of Lugano. Lying on the shores of Lake Lugano and enjoying hot, balmy summers, the city of Lugano has attracted an ever growing number of celebrities, entertainers and successful sports people, earning it the nickname of "Switzerland's Monte Carlo."