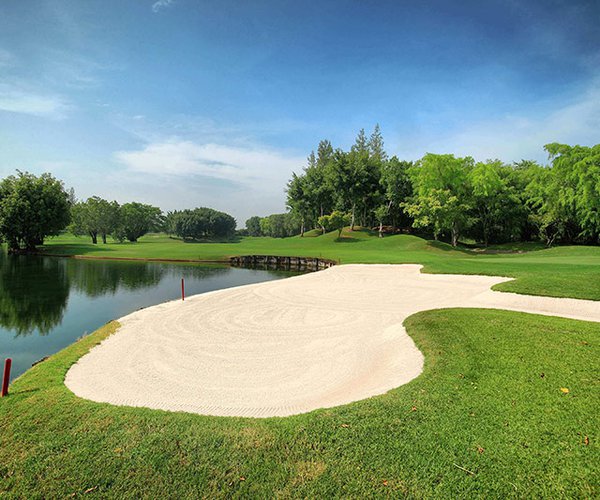 Take the Eastern Outer Ring Road (route 9) and head north from Bangkok. Exit right at Klong Luang onto route 3214, heading east. After 1 km, at end of road, turn left onto the 3010 and continue alongside the klong (canal). After 4.5 km golf is on your right.

Alpine Golf Club: For a long time the standard bearer for top-rated golf in Thailand, it is easy to fall for the undoubted charms of this excellent layout. All manner of trees, bushes and shrubs, including a wonderful variety of palm, mahogany and cork trees, flourish within this exotic and undulating parkland layout.

It is hard to imagine that Alpine was originally created from rice paddies - as flat as can be. In sharp contrast, the golf course is now home to significant elevation changes and a wonderfully rolling undulating design. Water is still much in evidence, along with beach-style bunkers, which most notably protect the front of the par-3 3rd and 12th holes.

Alpine is not for the faint-hearted. Some of the drives you'll need to make feel as tight as driving through the streets of downtown Bangkok. Finding the often water-protected greens is also no mean achievement. The 7th and 11th holes for example, are both played to what are in essence island greens, connected to each other by a small sliver of land. With these relatively small putting surfaces to aim at, it is a mesmerising fact that Tiger Woods actually eagled the 555-yard par-5 7th on his way to winning the 2000 Johnnie Walker Classic - wonders will never cease.

Alpine is clearly a layout that will test the best, but also one that is full of wonderfully picturesque holes, lots of lush vegetation and, for the Bangkok area, an extravagance of undulations and "alpine" earthmounding.

Must book in advance. An established (low/medium) handicap is required. Proof of handicap may be requested.

Non-metal spike facility. Walking permitted at all times. Golf carts available for hire, and must stay on cart paths at all times. Caddies used by all players.

Alpine has hosted many top level tournaments including the 13th Asian Games in 1998, Johnnie Walker Classics, Thailand Amateur Championships and the Thailand Ladies Open. Tiger Woods won the Johnnie Walker Classic here in 2000 (see our Tournaments section >by Venue >Alpine GC). The golf course received a major facelift in 2003, since when it has maintained its status as one of Thailand and Asia's best courses.