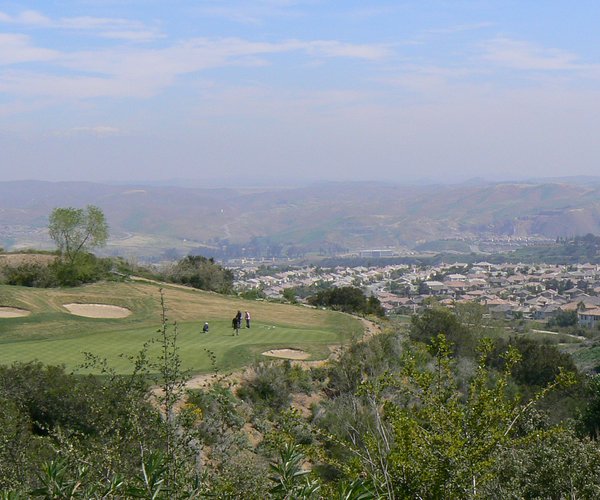 From the city of Corona follow I-15 South and take the Cajalco Road exit, and head west on Eagle Glen Pwy. After 1.7 miles golf entrance is in front of you.

Eagle Glen Golf Club: Skirting the base of the Santa Ana mountains on the edge of the huge Cleveland National Forest, Eagle Glen is renowned locally as one of the most enjoyable, dramatic and best value golf courses in the greater Los Angeles area.

The front-nine takes you on an immensely dramatic, roller-coaster journey through the hilly chaparral (shrubland) of the Santa Ana foothills, while the back-nine occupies the flatter but no less interesting floor of Bedford Canyon, an attractive bush-lined valley (or glen as they might say in Scotland).

A spectacular climb on the first three holes brings you into and through fabulously natural and unspoilt, bush-clad hills that confer great definition and uniqueness on each hole. The panoramas from the higher elevation are quite simply spectacular, and so too are many of the holes. The downhill par-3 4th is one of the best, along with the par-5 5th, its fairway split in two by a sizeable creek.

Although equally natural, the back-nine is quite a contrast from the constant elevation changes of the front-nine. Once you get past the dramatic descent at the par-4 11th, flatter terrain takes over as you journey through picturesque Bedford Canyon. The later sections of the back-nine are played alongside distinctive cliffs and rock structures, culminating with the par-5 18th where water seriously threatens for the first time.

With good maintenance, excellent bunkering and great views throughout, put Eagle Glen somewhere high on your list of "must play" courses in southern California.

Must book in advance (60 days ahead is permitted).

Eagle Glen is located on the edge of the Cleveland National Forest, the southernmost National forest of California, which encompasses the Santa Ana mountain range. The golf club, like the forest, mainly comprises chaparral, and a few riparian areas. Chaparral is a shrubland or heathland plant community found primarily in the state of California, while riparian areas are found at the interface between land and a stream. Plant communities along the river margins are called riparian vegetation. The riparian areas on Eagle Glen's 5th, 6th, 11th, 12th and 13th holes are environmentally protected.