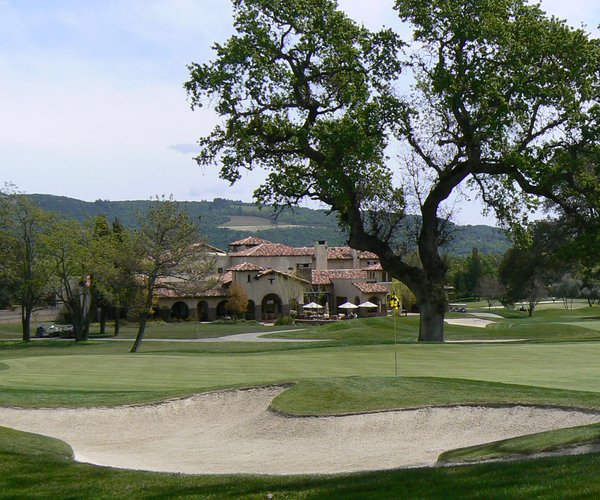 Sonoma Golf Club: Resonating with the area's finest wines, golf architect Sam Whiting has etched a golf course of the highest quality onto the scenic and blissfully tranquil environment of the Sonoma Valley. The balance and blend of long and short holes is underscored by the layout's smooth contours, stylish bunkering and the presence of many fine old oak trees liberally dotted around the relatively open terrain.

Exuding an air of classical timelessness, while also keeping pace with the modern game, the layout creates a perfect rhythm as you move through the round. From the front-nine outer loop, you can inspect the progress of the grapes in neighbouring vineyards, and admire the tree-clad slopes of the Sonoma and Mayacama mountain ranges. The inner back-nine loop is every bit as good as the outer, also combining gentle elevation changes, good-width rolling fairways and plenty more of that stylish yet threatening bunkering.

The distinctive collection of par-3s joins the rest of the layout in laying down a worthy challenge to golfers of all abilities. Three of these "short" holes measure over 200 yards from the back tees!

In common with sampling the area's finest wines, completing a round at Sonoma is to indulge in an unforgettable experience. Understated simplicity and a lack of extravagant embellishments typically confers a distinctive edge on many classic golf courses. Sonoma is an excellent case in point.

Resort guests staying at the Fairmont Sonoma Mission Inn & Spa can book to play on weekdays and weekends.

No outside visitor play available.

During the 1920s "golden age" of golf development in northern California, course architect Sam Whiting transformed the former J.K. Bigelow ranch into an 18-hole jewel. The layout, known at first as the Sonoma Mission Inn Golf & Country Club, capitalised on the historic lore and romance of the Sonoma Valley. Since that time, the course has hosted many top-level tournaments, including the Champions Tour's prestigious season-ending Charles Schwab Cup Championship (see our Tournaments section >by Venue >Sonoma GC).

The nearby Fairmont Mission Inn & Spa owes its existence to the underground hot mineral waters in this area, first discovered by native Americans. In 1840, Dr T.M. Leavenworth, an eccentric San Francisco physician, was the first to commercially develop the hot springs.

In 1895, Capt H.E. Boyes, an enterprising young Englishman, acquired some land hereabouts, drilled a well, and struck 112-degree water at 70 feet. Within five years, he had built the Boyes Hot Springs Hotel into a successful venture where well-to-do San Franciscans "took the waters" at the finest hot mineral water resort in California. In 1923, a fire destroyed the hotel. Four years later the current Inn rose from the ashes as an architecturally accurate replica of a California Mission.