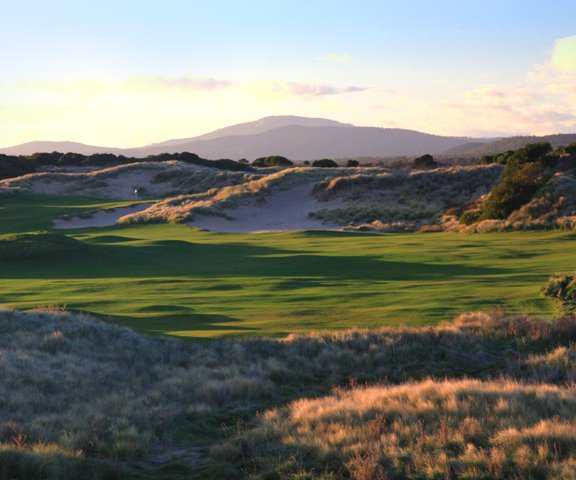 Above distances are for the 18-hole Lost Farm competition course, which is supplemented by two additional short par-3s: 13a and 18a. Also at Barnbougle is the 18-hole Dunes course (par-72; 6148 m from back tees).

From the coastal village of Bridport, head east along Waterhouse Rd (B82) direction Waterhouse. After 5 km Barnbougle Lost Farm is on your left.

Barnbougle Golf (Lost Farm course): Laid out on Tasmania's wonderfully natural north-east coast, Barnbougle's original Dunes course opened for play in 2004. The club's owner Richard Sattler, was clearly not content with just one world-class layout. The extraordinary tract of pristine duneland, which lay between his farmland and the sea, could easily support a second layout ... and maybe one with more than 18 holes. In 2010 The Dunes gained a sibling ... Lost Farm.

The Lost Farm layout features 20 holes, all of which are playable in any one round. The course tracks along the coast and inland amongst sand dunes that are significantly steeper than those of the original Dunes course. Designed by Ben Crenshaw and Bill Coore, the newer layout is located east of the original course, just across a small river inlet known as Adam's Cut. The far end of the course rubs shoulders with a huge shifting dune, which measures over 3 km long and a kilometre wide.

Boasting many spectacular holes, the layout winds through the impressive duneland, alongside the Forester River and inland towards the Tasmanian hinterland. The golfing thrills and ocean vistas onto Bass Strait, match those of its older sibling. Lost Farm, like The Dunes, presents another excellent golfing challenge in a classical seaside links setting.

Non-metal spike facility. This is a walking course; golf cart (with escort/driver) only available for hire on medical grounds. Caddies available, if pre-booked.