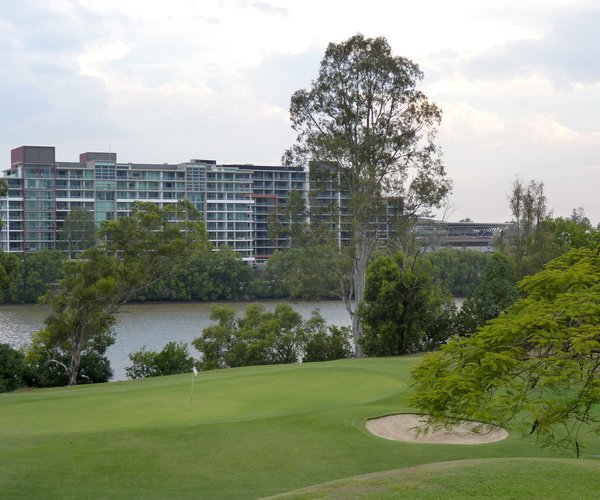 Above distances are for the East course. Also at Indooroopilly is the 18-hole West course (par-72; 6375 m from back tees).

Indooroopilly Golf Club, known locally as "Indra", boasts two Ross Watson championship redesigns, both dating from 1985. The East course combines the Blue and Green nines, while the usually higher-rated West course comprises the Gold and Red nines. Occasionally, other combinations of the four nines are also used (see Did You Know section below).

There is much to like about the variety and quality of the holes to be found on the East course (Blue-Green), with its pleasantly undulating layout and lovely views from the higher elevations. The layout features much less bunkering and water hazards than found on the West Course.

Indooroopilly GC's original home was in St Lucia, just south of Brisbane. Here in 1926 they opened an 18-hole course, which is today's St Lucia Golf Links (a public course). In 1964, Indooroopilly added to their St Lucia course, with a second 18-hole layout a couple of kilometres further south at Long Pocket ... on the banks of a horseshoe bend in the Brisbane River. Based on exchanging the original St Lucia site for additional land at Long Pocket, the club developed their current 36-hole golf complex in 1976, and permanently moved away from their original St Lucia home.