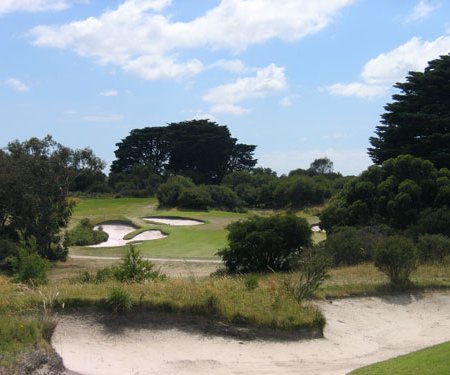 Above distances are for the West course. Also at Royal Melbourne Golf Club is the 18-hole East course (par-72; 6030 mtrs from back tees).

Occupying rolling terrain on an easy draining sandy base, this is every bit a "heathland" course, with tracts of heather bordering many holes. Also present beyond the generally good width fairways is a mix of small trees, bushes and other uncompromising rough, that's well worth steering clear of. There is not too much to look at beyond the course, but you can be sure the superbly crafted holes will keep you focused on the golfing job at hand.

There is an understated simplicity in MacKenzie's design. The expansive layout, containing several surprisingly wide fairways, does not create an impression of being unfairly tight or inhibiting from the tee. But don't interpret this to mean the course lacks "bite," far from it.

In addition to the deeper vegetation that will swallow-up seriously wayward shots, you will need to navigate your way around (or out of) a plethora of stylishly crafted bunkering found along the fairways, and protecting the often huge, lightning fast and sloping greens. You're putting touch at Royal Melbourne will be tested as never before; some of the challenges here are akin to putting on a tilting billiard table.

Playing to your handicap, especially on a first visit, is not an easy proposition on this challenging course. The subtleties of this and most MacKenzie layouts, need to be learnt over time, with "local knowledge" a valuable commodity in any round you play here.

Maximum handicap: men 36; women 45. Introduction letter from home club required. Only one of the two courses can be played on the same day.

This is a walking course. Golf carts can be booked in advance (medical certificate required). Caddies available (if pre-booked).

Established in 1891, Melbourne Golf Club was originally based on the Caulfield links (approx 8 mi away), before moving to Sandringham, and then to its current Black Rock site.

Royal Melbourne is one of eight golf clubs in Australia honoured by exercise of the Sovereign's royal prerogative. Queen Victoria conferred the Royal title on the club in 1895. The eight Australian 'Royals' are (in order of gaining Royal status): Melbourne, Sydney, Queensland, Adelaide, Hobart, Fremantle, Canberra and Perth.