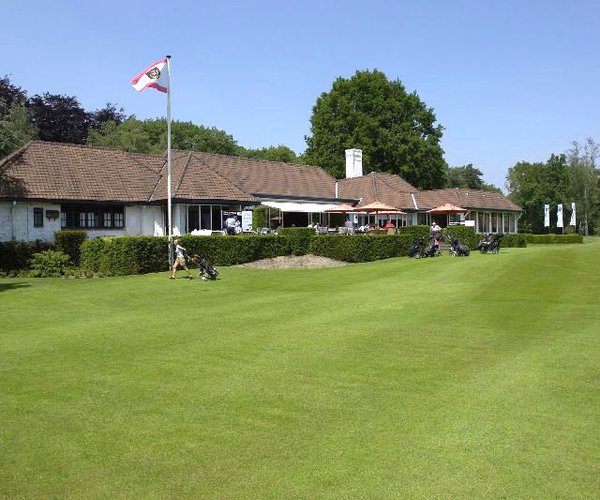 Above distances are for the Tom Simpson course. Also at Royal Antwerp is the 9-hole Dormy House course (par-34, 2552 metres from back tees).

From the A1 - E19 (Antwerp - Breda motorway) just north of Antwerp, take exit 5 (Kapellen / Brasschaat) and follow the N11/N1 direction Kapellen. After approx 6 km in the center of Kapellen, follow signs for Putte / Kapellenbos. After a further 2 km, at Shell petrol station, turn right onto the N122 (Kalmthoutsestenenweg) direction Kalmthout. After approx 4 km, just after the railway crossing, turn right into Golflei. Clubhouse is at the end of this road.

Royal Antwerp is Belgium's oldest golf club, dating back to 1888. Located in the Kapellenbos north of Antwerp since 1910, the course has often been described as one of the finest (and certainly quietest) wooded heathland courses in north west Europe. The excellent sandy soil base is perfect for this style of course, with its copious quantities of heather and mature pine trees lining many of the fairways.

The terrain at Royal Antwerp is relatively flat, giving an easy-walking layout, although one with plenty of inherent golfing challenges - not least staying out of the trees and plentiful bunkering, and getting down in two on the usually immaculate and fast greens. Water ditches are scarce, making a brief appearance on just a couple of holes.

At over 6600 yards from the back tees the course plays long enough to amply test the vast majority of golfers, especially if there's a bit of wind swishing around between the pines. This is not a layout that requires a booming drive off every tee. Course management and good placement will serve you just as well if its a good score you are wanting to card.

The opening and closing holes, both shortish par-4s, provide the opportunity to start and finish your round in style. What happens in between is probably down to your course management, and (of course) the fickle fads of the golfing gods. A course that always exudes plenty of charm and challenge, no matter what time of year you play it.

Must book in advance. Maximum handicap on main course: 28 men & women. Proof of handicap may be required.

Belgium's oldest golf club started life in March 1888, when a certain W.J.R. Watson invited home a group of English friends who were in the habit of practising golf on sandy Wilrijk Heath. The friends - S.H. Woodhall, J. Proctor, W.P. Wild, L. Evan Thomas and L. Potter were all enthusiastic about Watson's idea of establishing a Golf Club in Antwerp. By the end of 1888 the Club had already signed up more than twenty members. The Wilrijk Heath site had many draw-backs and a search started in 1904 for an alternative site. It was not until 1910 that the Kapellenbos location was eventually agreed upon, and work started on an 18-hole course, designed by Willie Park Jnr. The course was ready for play and opened in 1912.