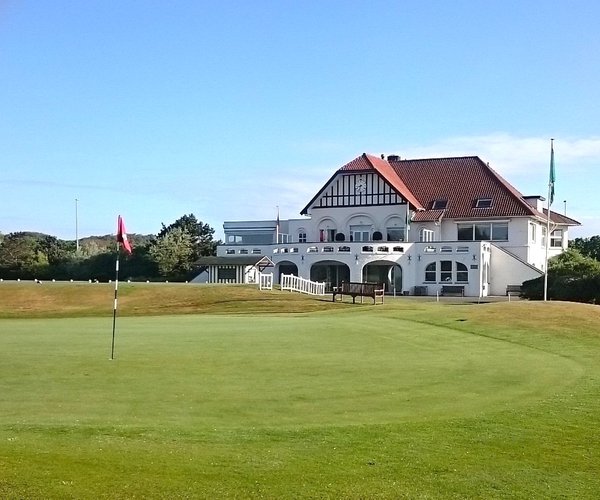 Royal Ostend Golf Club represents Belgium’s only real "beside-the-seaside" links golf course (others like Royal Zoute are located a little way inland). Here at Ostend many holes make excellent use of an impressive area of sand dunes. From the long par-4 5th through to the par-5 14th, you play across fabulously open and gently undulating golfing terrain, with few trees, fine sea views and probably a bit of North Sea wind thrown in for good measure.

The course starts and finishes in a flattish environment where small trees and bushes, and occasionally water, need to be carefully avoided. The look and feel of these opening and closing holes contrasts sharply and a tad infavourably with the majestic middle section of the course.

Of special note are the layout's five par-3 holes, all of them excellently bunkered and presenting a testing challenge both from the tee and when you arrive at the usually fast and sloping greens. The par-3 6th and par-3 8th, both played from elevated tees, provide the best of the sea views.

The occasional crossing of roads and tram tracks may give a slightly disjointed feel to your round, but for many this simply adds to the fun of an authentic seaside golf experience. Especially with its wonderful middle section, Royal Ostend could easily hold its own with many of the revered coastal courses of Britain and Ireland. As it is, located here on the Flanders coast, it gives Belgium a chance to proudly proclaim its own rather special seaside links golf course.

Visitors welcome on weekdays and weekends. Members only noon to 2pm.

Must book in advance. Maximum handicap: 34 (during weekends in high season: 28). Proof of handicap must be shown.

At the end of the nineteenth century, King Leopold II wanted to make Ostend more attractive for British tourists and decided to establish a golf course between Ostend and De Haan. The course was designed by Seymour Dunn and inaugurated on 1 July 1903. Despite being destroyed in both the First and Second world wars, the club and course were twice rebuilt to provide an excellent seaside golf outing for local and visiting golfers, and keen golfing members of the the Belgian royal family.

King Baudouin conferred the Royal prefix on Ostend GC in the mid-1950s, at a time when it was considered the "summer retreat" of the Royal GC de Belgique in Brussels. In Belgium 13 golf clubs are permitted by royal prerogative to use the "Royal" prefix. They are: Antwerp, Anderlecht, Bercuit, Chateau d'Ardenne, des Fagnes (Spa), Hainaut, Latem, Limburg, Ostend, GC de Belgique (Ravenstein), Sart Tilman, Waterloo and Zoute.