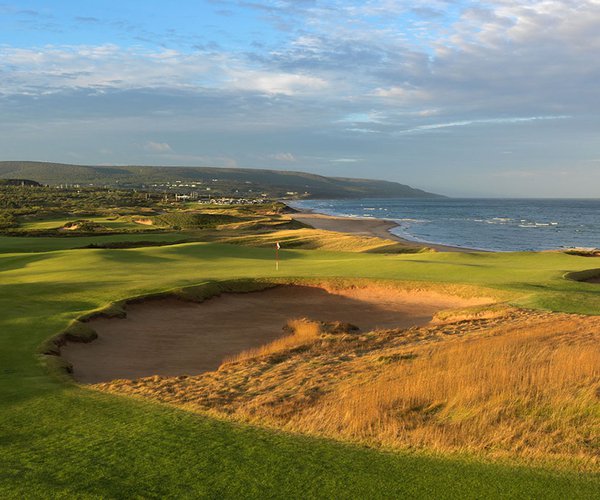 Above distances are for the Cabot Cliffs course. Also at Cabot Cliffs is the 10-hole par-3 The Nest course. Located 1.5 km to the southwest of Cabot Cliffs, with its own clubhouse & lodging, is the original 18-hole Cabot Links course (par-70; 6,854 yds from back tees).

Cabot Cliffs: Created by Mike Keiser (of Bandon Dunes fame), Cabot Cliffs and its older sibling Cabot Links provide an unrivalled links golf experience on Canada's Atlantic coast. A unique 36-holes of oceanview golf. Just 1.5 km along the road from Cabot Links and the town of Inverness, the undulating terrain behind Broad Cove is now home to Cabot Cliffs, another in a world-class collection of seaside links courses designed by the Coore-Crenshaw team.

The sensational new sister course of Cabot Links, is also a championship layout that ranks with the best. With six par-3s, 4s and 5s, ten of the holes have you golfing directly alongside the shoreline of Broad Cove on the Gulf of St Lawrence.

The terrain is more undulating than on its sister course, which allows greater elevation changes on some holes. Pockets of trees also put in occasional appearances. But this is certainly not a tree-lined course. Similar in style and length to the neighbouring Links, here you'll find equally impressive man-made dunes, rugged bunkering, large sloping greens and huge chip 'n' run green surrounds.

Mike Keiser once famously contended that the fame and notoriety of golf courses is a reflection of their "holy shit!" holes. If that's the case, then the closing stretch at Cabot Cliffs will be its passport to the top. The incredible par-3 16th plays across a small cove into a green perched above an extraordinary formation of gypsum and sandstone cliffs. It is destined to become a world beater. The short par-4 17th plays back towards the cliffs, a daunting blind drive has to be made across the cove and over the cliffs. The views from here, and many other parts of the course are simply stunning. The par-5 18th plays straight downhill in the direction of Margaree Island (Cabot's "Ailsa Craig"). The final green hangs out over the coastline. A thrilling closing hole to a spectacular golf course.

Visitors welcome on weekdays and weekends during the golf season (usually mid-April thru' mid-Nov).

Contact club for information on golf rates and Stay&Play packages.

Cabot Links and Cabot Cliffs are built above former underground coal mines that stretch 2 km out to sea under the Gulf of St Lawrence. The courses take their name from the Italian navigator and explorer John Cabot (c.1450-c.1500). Commissioned by Henry VII of England, "Zuan Chabotto" (in his native Venetian) is thought to have been the first European to explore mainland North America since the Norse Vikings. Cabot made landfall somewhere on the coast of North America in 1497; Cape Breton is one of a number of locations where this landfall possibly occurred.